I have been thinking about 'Longitude' which is the yardage exhibition for Convergence 2012. One possibility is to use the fan reed on the Kombo. I would definitely do this in as thick a cotton as I could get away with because weaving with a fan reed is SOOOO  SLOOOOOOOOOOOOOOW.  I am currently thinking over how I could replicate my ideas before setting out to weave. I might take a photo of a fan-reed fabric and use Photoshop.  Otherwise it will have to be a large sheet of paper and acrylic paints. And there is a long warp of double weave 30/2 Tencel on the Kombo so that will have to be  finished soon. 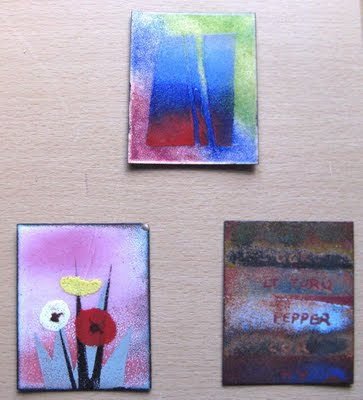 I was musing to my sister, Dorothy, last week about Small Expressions which is also a Convergence exhibition. I have always wanted to enter for that and indeed two years ago designed and wove several versions of an item intended for entry but I decided the quality was not good enough - mainly because it relied on hand stitching up one edge. You can see one here.  It was very difficult to get the faces to exactly the right dimen-sions. I made 5 or 6 of these and, although I could have done one after that, I was very bored. I still have the damned things lying around the house. Well some of them. I managed to give 2 or 3 away.
Dorothy suggested the existing multiple weave with Michael's enamels.You can see that here.    I wouldn't want to use that but I do have a few more enamel samples - the three shown on the left. These are bigger than the previous lot. The last one was three layers of, cloth one grey silk to hold the enamels in and show them off, one black cotton to back each enamel and striped cotton which comes to the front elsewhere. It occurs to me that the black cotton and the grey silk only occupy  4 of the Megado 32 shafts - so suppose I made two additional layers each of diversified plain weave and wove motifs to echo those on the enamels? Or could I get away with one tabby and one DPW? Interesting. The last time I got Michael to produce a watercolour painting on very heavy (300gsm) watercolour paper and did a practise run. I only had to weave two versions, the paper one and the real one.  It will probably take longer to warp up than weave. And there is a queue for the Megado. However the Megado has to be used because it has the most space  between reed and breast beam. This project does not roll up on a cloth beam!!!!
Last night I joined a chatty group at Moulsford and enjoyed it enormously while managing to wind two warps. I must go and tie on the dark blue indigo warp.
Posted by Pat at 18:17