Yes, flu, no not Covid. Just plain flu accompanied by sinusitis, aching bones etc. Not possible to do much. I live on paracetamol and sudafed. However I do think I am getting better and the films on over the holiday period have cheered me up. For instance I am a devoted fan of Carry On films and my alltime favourite was shown on TV - Carry on up the Kyber. Now the rest of the family thinks these films are low class and not quite respectable. I doubt if they could be made today because they are very politically incorrect.

I have managed to do several things. I set out to take part in the Online Guild`s UFO month and the first thing on my list is to make a waistcoat ( using a Daryl Lancaster pattern). The fabric and its dark red lining are shown below. 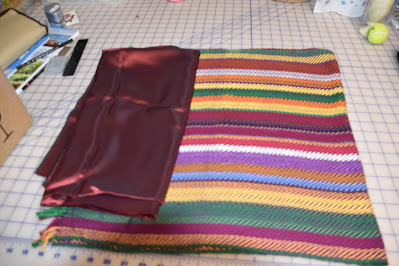 The stripes will run vertically. Construction is well under way. I have a large metal cupboard in which I put all my fabric and I search in there for a suitable lining. I originally intended to use some very nice Tencel fabric woven by me using a draft from the book The Draftts of Jeremiah Fielding but decided it was too nice to be hidden as a lining. Anyway. I was horrified by the amount (and quality) of what was stashed away in the cupboard. My daughter, Ruth has taken away one armful and I will take some to the refugees  in Didcot. But I still have several lengths of gorgeous fabric, include four lengths of tweed woven by me. Each is quite sufficient for a jacket and I do not ned four new jackets. Could do with a bomber jacket for round the house though and two of the lengths would be good for that.

And now I must get on. Today`s job is darn the elbows of one of Ruth`s sweaters. She is working in conservation these days and is often out on moors so she needs all the sweaters she can get.