NO I AM NOT WINNING

Progress is being made on the Megado - but there was a very serious hiccup. Over last weekend, the lap top took to switching itself off - -  without any warning. But it could be turned on again and nothing had been lost. Until eventually, it refused to switch on. So I had to send for our on-call computer man who pronounced that it was overheating and if I changed to a Solid State hard drive and used a cooler, it would be okay. And so he cloned my hard drive (which means the old one is a backup.) and actually it does not get the least bit hot. which it did before, and now seems okay. Nevertheless, I am shutting everything down after an hour of use and after taking a note of where the pattern had got to. It does mean I have lost three days when I could have been weaving.
However I have woven two metres and calculations show that I do not have to order up more yarn from William Hall. So I am still on track to finish all 6 metres by the end of May.
Not done much else except watch a Zoom talk by Lester Capon, President of the Designer Bookbinders. His bindings are stupendous. I have not been so bowled over in a long time. I have four A5 textblocks all prepared for binding and the bindings cut out but they have just been discarded while I set out a new episode in my bookbinding. Mind you, he works in leather and I do not but I will do some trials with bookcloth.
The last bit of news which is an annoying event is that I have to have a procedure next Sunday, sticking a camera down my throat without an anesthetic. Nasty but in a good cause. That is not the annoyance. That is that I must self isolation from now (Thursday) until Sunday afternoon. Not to see anyone, Not to leave the house. It sounds as if gardening is not allowed, nor dog walking. And all this despite having had two vaccinations. Bah.
Posted by Pat at 16:50 No comments:

I expected trouble today - with computers. But it all worked out well!! Let me explain. Start with a Kindle/my Kindle. Bought many years ago, the battery just died 18 months ago and I could not summon up enough energy to do something/anything about it. Over the weekend I came across the carcass and decided I was well enough to cope. So I bought a new Kindle and it was delivered the next day, Sunday. Put it on to charge overnight and wondered if connecting to Wifi was going to work. So I set aside Monday morning to (hopefully) achieve the connexion. It all worked and I was connected in less than ten minutes! All is well. The books I used to have in my library are still there plus, to my astonishment, all Dorothy`s books. She says that what they do these days when people clearly live at the same address. I can see that might not always be acceptable.
And now to the second adventure - the Megado. This has not been switched on for over a year. Last time I used it, I had terrible trouble with the software which sends commands to the Megado`s relays. I asked Marion Proctor, an expert weaver from our Guild, who I knew had the same equipment as I have. She said she had the same problems but tried a load of experiments and found what worked which is, have absolutely everything connected before switching power on the lap-top. So first thing, connect everything, second thing switch computer on and pray. Next thing, there it was demanding the entry password and in no time at all, I had a working system. Mind you, I then had to consult the desktop down stairs and the 3 metres I have already woven to make sure I get all the colours right. I am weaving lampas and need three colours, that is, three shuttles. two throws of brown, one throw of yellow and one throw of green or beige depending and repeat these four for ever. Being lampas which is really a form of double weave, weaving is a bit slow but I only have 6 yards to go!!! Anyway if I keep at it, I should be finished by the end of May.
I managed 4 inches this morning which, given the fact I am cook this week, was quite good. The reason for wanting it finished is that I have a nice idea (four colour double weave) for a piece to be shown at the Guild exhibition in September. And for that I need to have the Megado clear by the beginning of June. As they say, watch this space.
Posted by Pat at 16:42 No comments:

I have finished the striped fabric which was on the Shacht. It is mended (odd ends to be disposed of) and washed. Not taken photos yet but will shortly. A long time ago (years and years) I asked Stacey Harvey-Brown what she did about photos of her weaving. Did she employ a professional? The answer was they were too expensive. They charged £600 to £800 a day and that would be much more today. Her advice was take  what has to be photographed outside on  a grey overcast (not too overcast)  day and look for a nice background. Well it is definitely a grey day so I will go outside and see what I can manage.
So I have taken loads of photos outdoors and the best four are shown below. 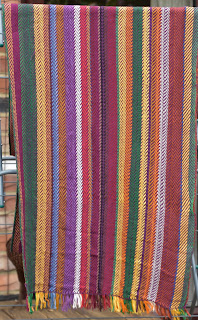 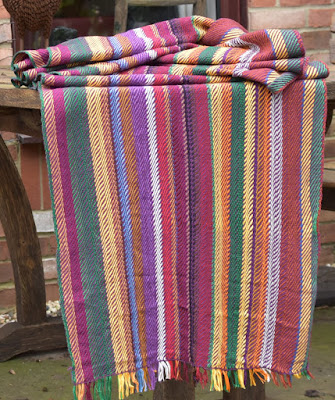 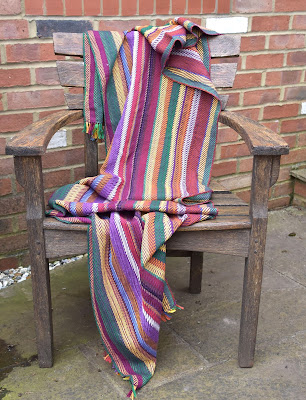 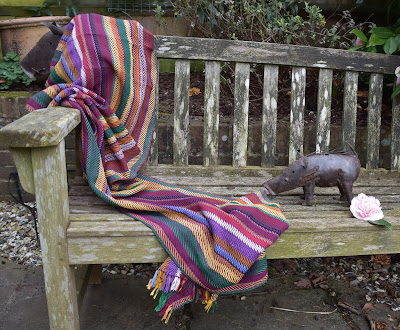 I like the last one best. I do agree that the top two show the fabric better. One thing that did shake me was the shrinkage. On-loom measurements were 0.59 by 4.10m which went to 0.48 by 3.72 m after washing. That is 15% in width and 10% in length.
I am having rest from weaving until next Tuesday when I will try to get the Megado to function after more than a year of neglect. I am tidying up everything.
PS I have a thing about warthogs which I saw wild in Africa and loved on sight. So I have two metal warthogs , Mummy and baby who is in the last photo.
Posted by Pat at 12:38 1 comment: