The warp end has appeared!

The end of the warp has appeared! I have perhaps 8 inches more warp before I finish this fabric. Then it will be inspection for repairs, hand wash and think about turning it into a jacket. As preparation I have been working on the colours of the stripes, based on what I have around the house in 8/2 cotton. At one point I had a complex pattern of stripes repeated three times but then decided no. So I have spent time today revamping it to use the same colours but across 24 inches not 8. So I am now already to wind the stripey warp.  The weft colour will be decided when I start weaving. I have allowed one metre for trials 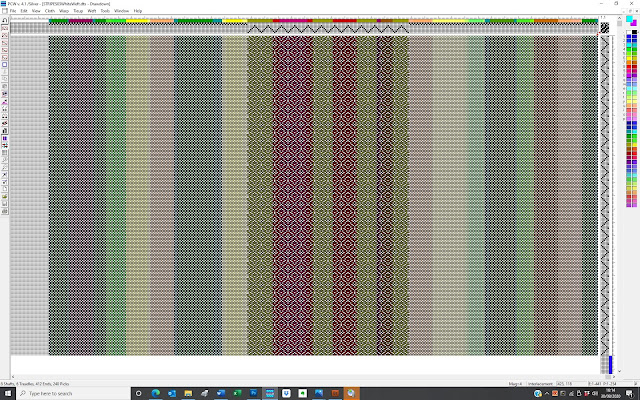 I have signed up with the Online Gild to take part in a course on Echo and Iris weaving by  Marian Stubenitsky. That needs yarn for a warp and she has sent out instruction as to what is required. I checked my stash but no luck. So next week, I will visit Handweavers Studio and buy the four colours neded.

My giant zinnias have started flowering. Below is the first flower. 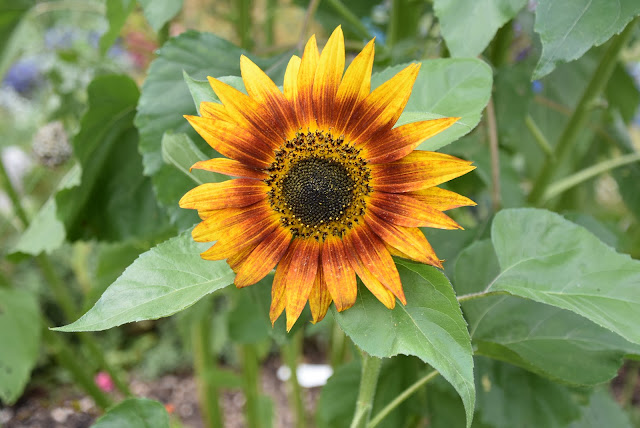 6.5 inches in diameter. Another has come out this afternoon, so dark a red as to be chestnut and just as big. I wonder if the breeder just crossed a zinnia with a sunflower, I am not enamoured. These are not what I expect from my zinnias. As soon as every one of the plants has flowered, they will be in the compost bin.

Yes I am back to weaving. Mainly because I want to get on to the next weaving (fabric for a vest by Daryl Lancaster).  I have bought a pattern from Daryl and also downloaded instructions for making one of her striped warps. I suspect I am going to have to buy more yarn! Not enough 8/2, 10/2 cotton in the stash. Oh well, I am going to do an OLG online course with Marian Stubenitski (echo and iris weave) and need some yarn for that.  But I am making good progress with my dyed silk/merino fabric on the Schacht. Getting near the end and the warp is not well put on so I have to keep stopping and make adjustments to the tension.

I have cut lino blocks, taken delivery of waterbased inks (easier to clean up) and read several books on linocuts and have generally been crafty.

I am also revamping the garden and cursing. See photo. 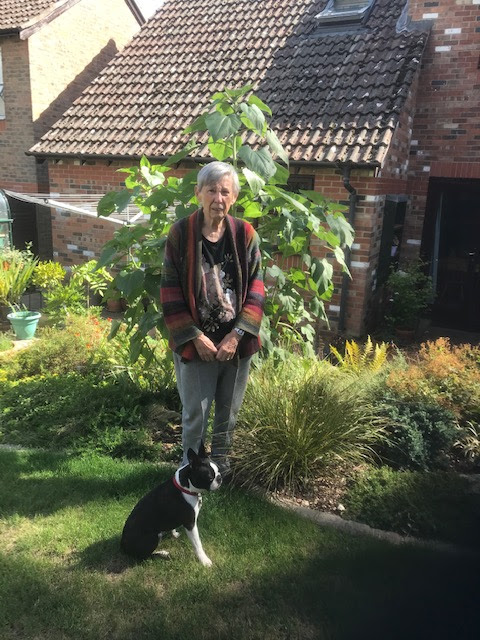 This photo shows me (and Jerry) in front of a mound of green about 18 inches taller than me. They are not sunflowers, I only wish they were. I should have read the seed packet. What it said was Zinnia Giant mixed. I did not expect 7 feet, perhaps 3 to 4 feet. Instead it has taken the plants months to get to this size and flowers look as though they will be sunflower size. I will post photos when the flowers appear in a few days. I cannot complain. Fortunately I kept the seed packet so was able to read what it said. So my fault completely but  bah! all the same. I did plant some ordinary ones, about 2 foot high and lovely.  However on the plus side we are being swamped with tomato crop and I grew several different sorts this year, Gardeners Delight, Marmande, little plum tomatoes, Sungold (very tasty). I am bringing in two handfuls of ripe ones every day.

Time Out in Norfolk

The coronavirus has made everything very complicated We had intended to celebrate Dorothy`s 80th birthday is great get together near Chichester  but that had to be cancelled. We had booked the dogs into their favourite dogsitter, so we left that booking and organised ourselves to visit Cally Booker (Dorothy`s daughter in Dundee) but at the last moment entry into Scotland turned iffy and we cancelled that idea. Using a lot of searchig we found a large caravan for rent for a week in North Norfolk (one of my favorite bits of the UK). And we spent the other week pottering about, that is, visiting Kew and Wisley, both of which had to be booked. The rest of the week was  spent in `Arts and Crafts`. Dorothy was printing on fabric and I was doing linocuts. I have not done them at home before although I have the necessary gear, press, drying rack, sheets of glass, inks etc. I used a Burnisher rather than the press but not satisfactory. Next time - which will be a few days, I will use the press. But I got some acceptable prints.

And then we went to Norfolk and it is a nice place. We fond an art shop in Wells and I spent far too much money. My only excuse is that I did buy a few family Christmas presents but I fear that most of the money was on a rather fine linocut of the locality. On the last day, we went on a seal trip to Blakeney Point. We seemed to be moving too fast for photos so I just pointed in about the right direction and went click click click. I was surprised when I only had to throw out 4 photos out of 35. Two were terns flying across and two were people getting in the line of fire.

The photos are from top Wells fairground, beached boat and baby seal. Aren`t they podgy!! 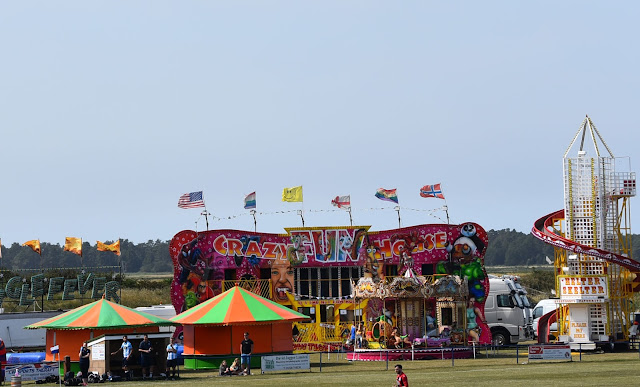 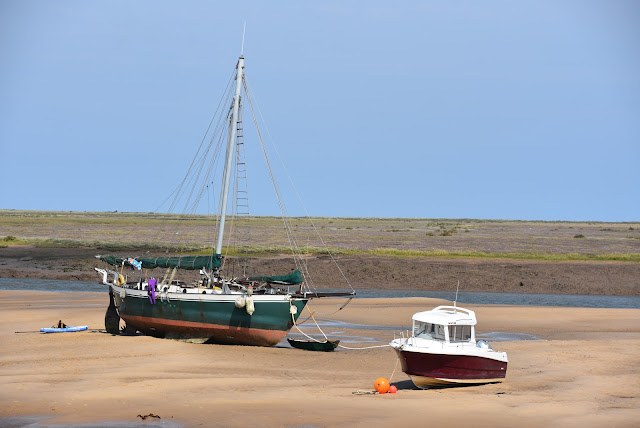 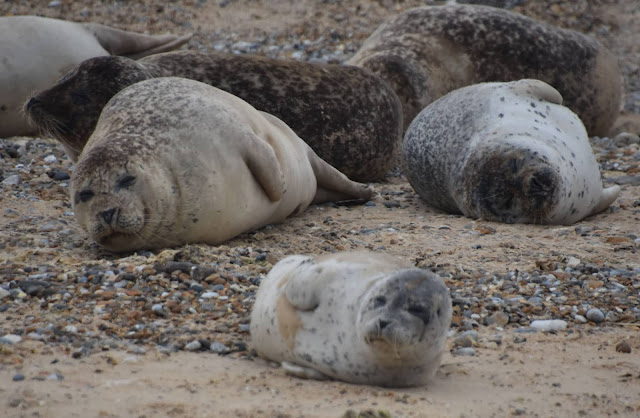 So I need to end with a note about my health. The hospital visits culminated in an MRI scan of my brain which was very unpleasant because I am claustrophobic. And was a waste of time. Nothing at all wrong said the consultant and referred me to the heart people who I visit it next week. However at one such meeting, I was put on aspirin and ever since starting that, I have got better. I would say I am about 95% of what I used to be. Getting through crafts like I used to. Lots of linocuts and bookbinding and an awful lot of gardening because I did not do any from February to July. In fact I am currently planning to revamp the garden altogether, next year early. I am going to a course at West Dean later this year where my ideas should be finalised.