A year ago I got a professional to create a website for me. I specified everything and wrote the text and she did everything else. The contents of the website are articles on various sorts of weaving and dyeing. She left me with instructions for editing the website. And then I became ill in February 2020 and stayed that way for some months.

Oe of the problems was that I am selling The Draughts of Jeremiah Fielding through the website (works beautifully) but because the postage varies madly round the world, I included a few sample costs of postage. Well some countries never change their postage costs and others work on a two-month cycle (USA for example). Now the costs of posting a copy of the book to the USA is 1.5 times the cost the book. And so I feel it is  essential to let potential buyers know what they are letting themselves in for. And this means changing the website text. Until November 2020, I got my grandson to do the editing but he now has a job and I feel quite quite well enough to tackle the job myself.

Besides the website has a section where a reader can download weaving files. This is my son-in-law`s fault. He discovered that I had created handouts, one for each weaving topic, for example woven shibori or lace for the Kennet Valley Guild weaving classes. And he asked what I was going to do with the handouts. He thought they should be freely available. So I promised that I would include them in the new website. But of course, each one had to be edited and brought up to date. Three different topics were put on at the beginning and I slowly edited the other three and have them ready for inclusion in the website. So there were two bits of editing.

I started on Saturday morning by reading the editor manual. And by the end of the day I had the postage costs all sorted. One problem I had not envisaged was that I had to edit every single section of the website. Part of the slowness was Google which behaves rather oddly and in a way I did not expect. On Sunday, I set about adding the three new files and I happily succeeded with two but would the third one go in? No it would not. So I gave up and called in my grandson who was puzzled at first but after an hour, remembered that in html, you have to use the exact name of the files, and that means upper and lower case. Bingo. I needed a glass of madiera after that.

I tidied up all the paperwork this morning, took `do the website` off my to-do list  and spent the day weaving peacefully on the Schacht. Done 3 metres, 1.5 metres to go.

Now I need to start on revising the dyeing handouts and  I was just wondering whether to include one on Japanese bookbinding. I wouldn't mind some feed-back on that.

I have warped five metres of fabric combining Daryl Lancaster and a weave from Oelsner (No 363)> Daryl made a waistcoat from some very brightly coloured Fabric and I was taken by the fabric. So I investigated my holdings of cotton in 8/2 and 12/2 and found I had a lot of small quantities. In fact as a resuk of preparing four equal warps, I acquired 18 empty white bobbins!!! and countless small quantities were used. The Oelsner draft is basically an 8 shaft undulating twill. And the sett was 24 epi. I used a reed of 12 slots per inch. Warping was terrible and I ended up with a lot of errors which took me two days to correct.

And yesterday I started weaving.

And here is the first 0.25 metres. Definitely loud!

The garden is beginning to spring and there are lots of flowers on the camellias. 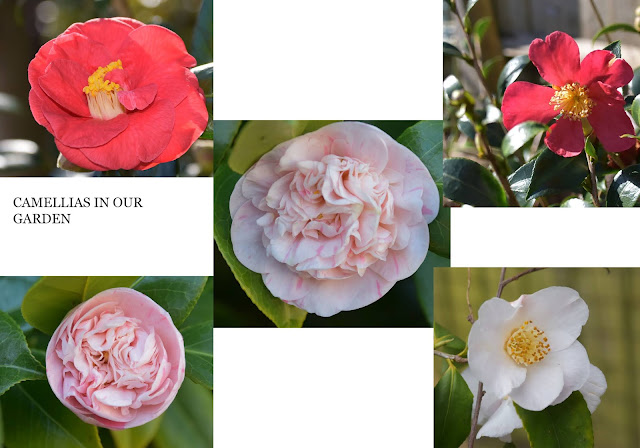 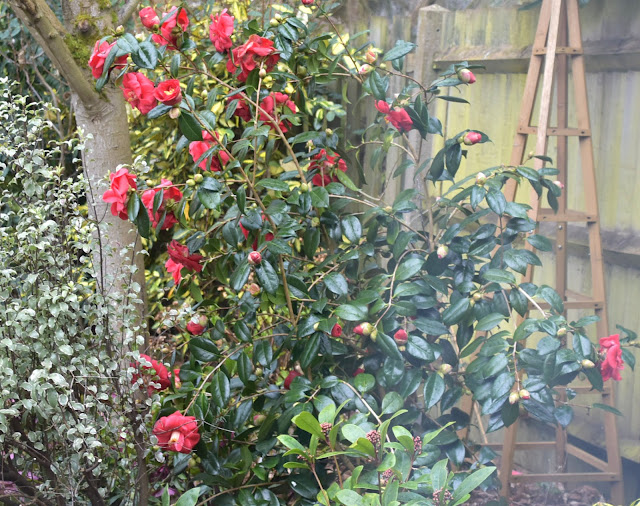 The lower one is in the front garden. Flowers are six inches in diameter.