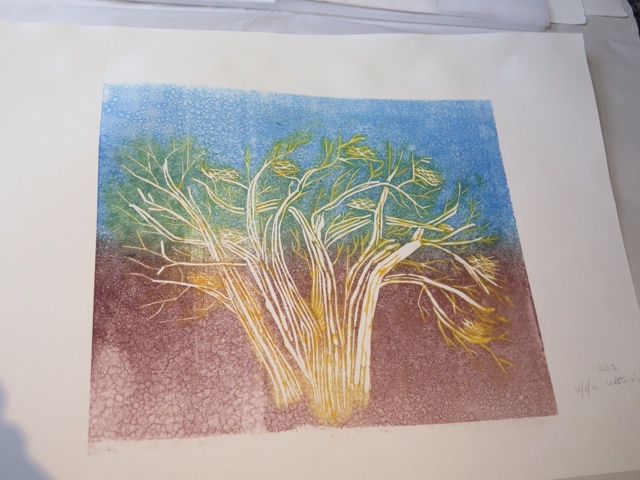 One of my printed Lino cuts. There are all sorts of colour variations. 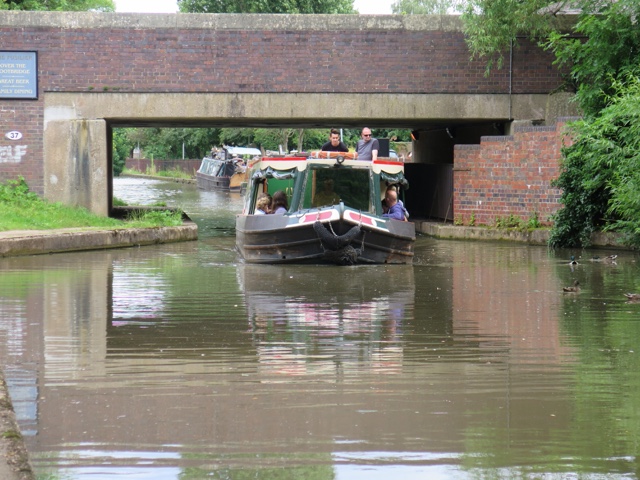 Walking by the Grand Union canal. 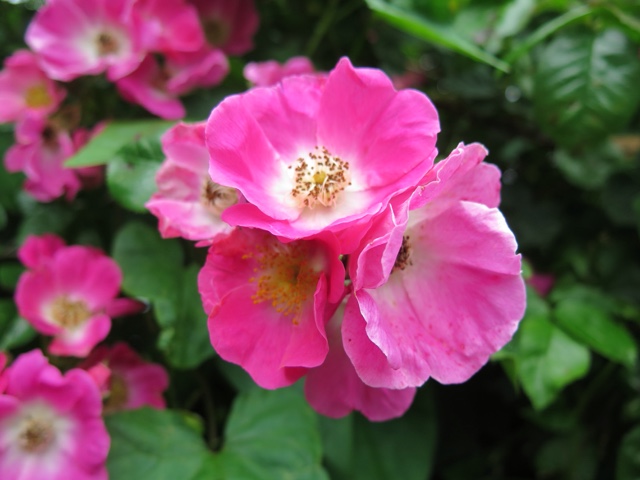 By the canal. American Pillar rose.
Posted by Pat at 10:01 2 comments:

I am in Leamington Spa, minding two grandchildren. Mind you they are teenagers. Today I took Alex into London on the train to see Charlie and the Chocolate Factory. Even I enjoyed it
I went to see Wicked some months ago and did not like that at all. So we had lunch out at Jamie Oliver in Covent Garden and pottered around the stalls and then went to the matinee. Got home exhausted.
Not much else to report. I delivered some China belonging to my sister which was quite profitable for her and visited my favourite sports shop to buy a new pair of trekking sandals. The current pair have done the Silk Route and two long hikes around bits of America and I am afraid of them giving up the ghost. It is quite something to walk into a shop after three years and say I want a pair like these - - And get the reply Yes, Madam, what size do you take?
I have a photo of the current overshot, see below. I have managed to weave quite a bit more.
On only four shafts too. 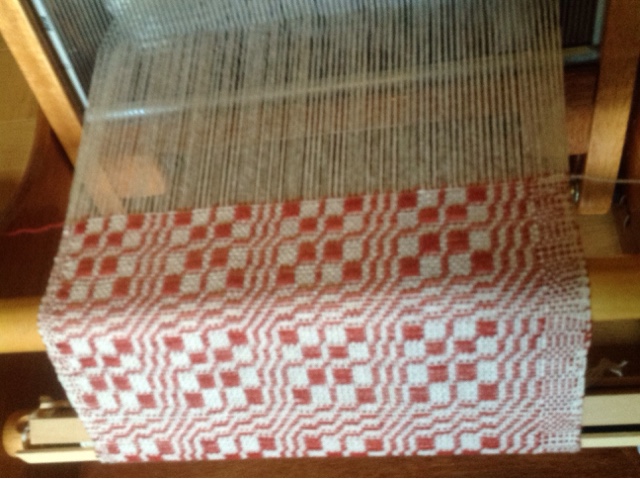 Last week we went on a photo shoot in a deer park a few miles away. We was Alex, my grandson, and his parents. And me of course. We started very early in the morning and were driven around in a tractor. The deer were used to this and did not stir when the tractor approached.
We spent two hours there and I took 100+ photos which I had to cull at home. 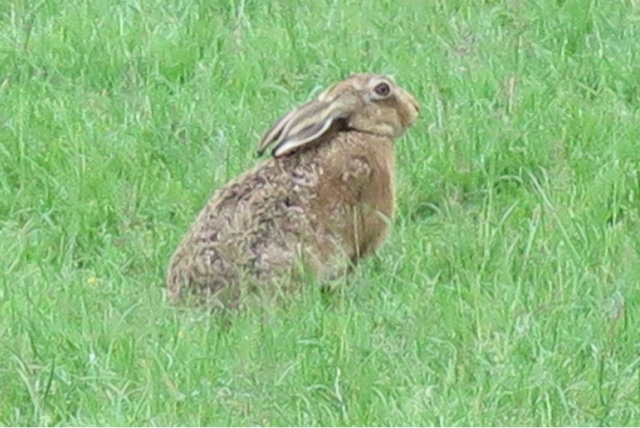 There was a hare, not that friendly to the tractor but I got a few photos. 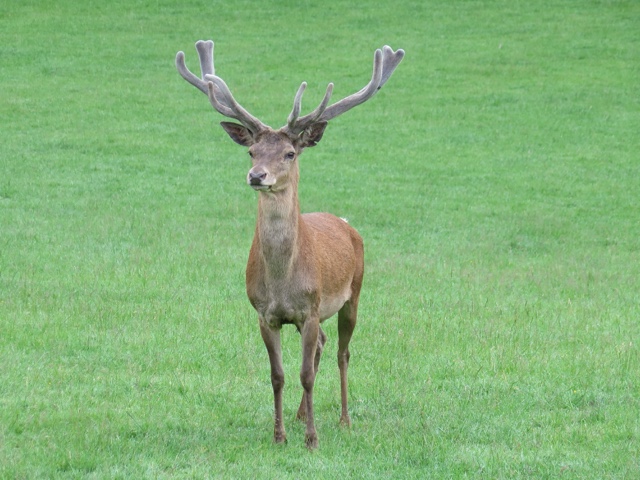 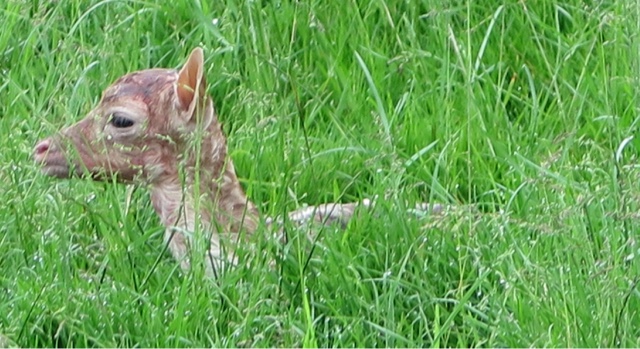 And a newborn, five minutes old.
The overshot scarf with bombers all over it has been finished and I have rethreaded with a new pattern.  I am now in Leamington Spa, looking after my grandchildren while their parents have a few days in Lisbon. I have brought the Meyer with me and hope to get some weaving done amidst the taxi service I seem to be running.
Other than that, I am having fun printing the lino cuts in different ways and colours. I sorted out the acid dyes a few days ago and have made new labels where required. Now all I have to do is make them up. I am running an avid dyeing class in two weeks time.
Posted by Pat at 07:19 No comments:

I have finished dealing with repairs to a copy of Gilbert White. I never knew ancient bookcloth (1890 ish) would not take PVA or rather changes character when PVA is applied. Oh well. It is the best I can do.

More important, I set about Cider with Rosie which should be submitted by the end of June. I have slowly been doing things to it, redoing the spine, adding endpapers. It did not have endpapers and I thought it could do with them so searched the stash and found a nice sheet of plain green. Today I started out on the covers, a lot of measuring and cutting and printing the cover on the fancy bookcloth I bought two years ago. The printer had hiccups when I put two sheets in the paper holder which took me 30 minutes to sort out. And then the measuring, and the cutting and glueing. It is now together. and the glue will have to dry before I attach cover to book. I might be able to do it this evening but think I do it first thing tomorrow morning. 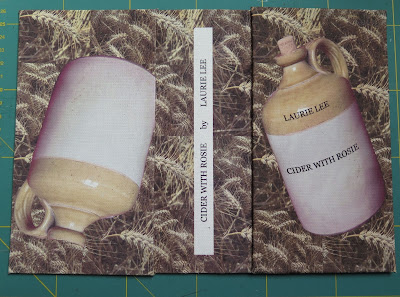 There was another exercise which occupied a lot of time over Sunday and Monday. I have a collection of pressed glass in green and clear which 1920/30s. It has been wrapped in bubble wrap in a cupboard since last September. Dorothy spotted a display case for sale locally. The problem was it would not go in her car and then she went to France. So I got Ruth and Robin to help me. When we got it home, it disintegrated and we agreed to tackle it on Monday. We took it apart and discovered that it was an IKEA object and none, but none, of the screws had been done up. We then reassembled it into a very solid object and it looks good with all the glass in it. But reassembling it took two of us three hours!

The result of binding four books in rapid succession is that I complained to the management about there not being enough space. I have been using a sliver of space in a small spare room which mostly held beds. The result was that the beds have gone, the furniture has been rearranged and a table introduction and all of a sudden I have wonderful space and do not hit my elbow on the wall every time I measure something. There is a cupboard over the stairs in that room and I cleared out, finding all sorts of things which I heaved in there last September and including a fabulous lino-cut, not done by me. So that will have to be framed.

However and much more important, I inspected all the lino-cut stuff and decided I did not like the prints made for the Lament for the Makars and abandoned that project. This morning, I did a baobab tree (photo taken in Namibia). 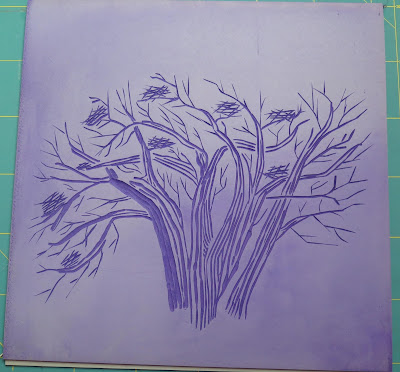 The prints are better but are all in the drying rack. Next week, there will be multi-coloured prints.

I have wanted to visit Eltham Palace for many years - a stately home of the 1930s built in Art Deco style. On Sunday Robin, my son-in-law, and I got the chance together with a lecturer from the V&A!!! She was very good. What was not so good is that the photo you see mostly is the entrance hall with its fabulous carpet, furnishings and veneered walls is about the only bit of true Art Deco. 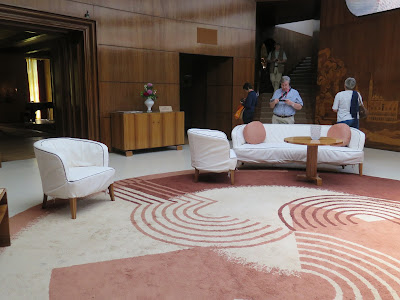 Eltham Palace was built by Richard II so the core is 15th century. Various kings altered it but it was abandoned by Henry VIII as too far from London and over the centuries  it fell into ruin. The Courtaulds (yes them of textiles, shipbuilding etc) took on the estate but on condition that they restored the Great Hall. 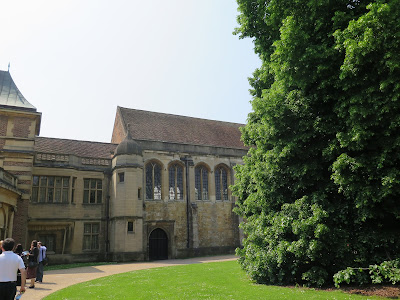 On the right, the Great Hall. On the left, the house entrance just visible as a couple of pillars. 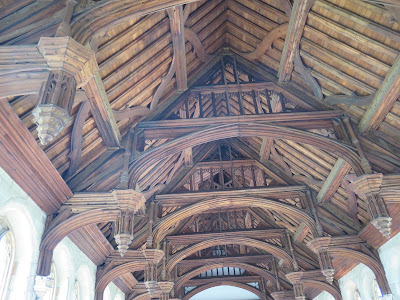 The hammer roof of the Great Hall. Actually held together/up by steel beams which Robin and I managed to spot.
As to the rest of the very large stately home, more luxury than taste and a right hodge-podge of styles. Four posters in Art Deco bedrooms and overornate bathrooms. 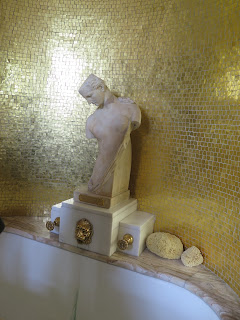 with the occasional Art Deco gem. 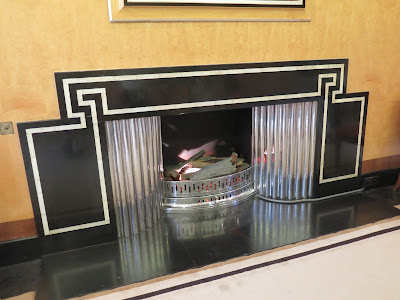 And it is still worth visiting for the entrance hall.

The gardens are magnificent but I ran out of steam after two hours in the house. So we ate lunch in the café and went home, wondering if the carpet design could be adapted for weaving. I will let you know.

I have started serious work on binding 'Cider with Rosie'. This entailed finding the material for the cover first and that involved tidying up my paper stash. However I did find it in a roll and it is now in the press being flattened out.

This afternoon, I revised and prepared all the art work so it prints to the correct size. 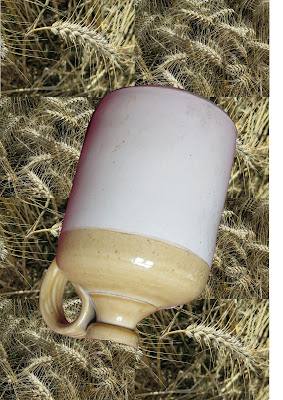 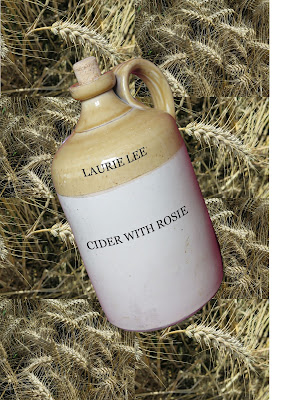 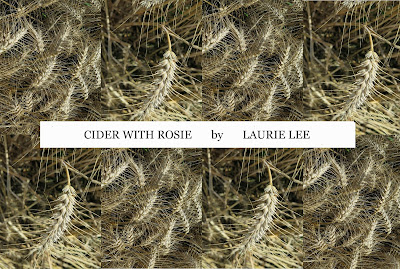 In order from the top, back cover,front cover, spine.

One thing working on the three textblocks showed was that the room needs seriously thought. And a lot of changes are going to take place next week.

18 months ago, I bought 10 textblocks all ready for binding into notebooks. They are not sewn but glued. My intention was to bind them and give them as Christmas presents. That is still true but four of them have served another function. I have done them in a double binding as practise for binding Cider with Rosie. The first sample I used as a notebook for my auriculas (completed ten days ago). Three more were completed this evening. 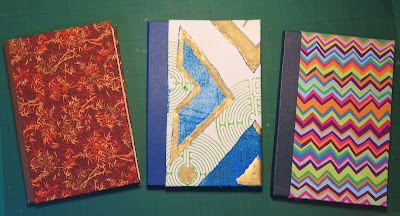 Book cloth is used for the spine and paperbacked cotton for the showy bits. The outer two are just bought quilter's cotton but the central one was created by me at one of Raymer Gilman's classes, gold paint and all. She is a wonderful teacher. On one occasion she spotted me from the other side of the class holding up a piece of cloth and looking mournful and she yelled, 'Don't throw it out. Use it as a starting point for a new piece'. Quite something.

I reckon I am now ready to bind Cider with Rosie and will start tomorrow.

No remarks about health and there are not going to be any more. You, dear readers, must be as fed-up with the topic as I am.