I have, at last, found out how to get into my blog with a Spanish WiFi. Mostly done by making wild guesses at the word meaning. Anyway we are in Andalucia and have stayed for three days in both Granada and Cordoba. Tomorrow we move to Seville.

We have been here before but for a half day each city. The Alhambra is overcrowded, in fact the number of tourists has gone up by a factor of 8 or 10. A bit grim for the natives. I have taken loads of photos and eaten a lot of high class food. I recommend aubergine fritters. Lots of lovely fish and huge helpings of meat.
The top photo is from Córdoba mosque and the bottom one from an excavated palace about ten km out of Cordoba. 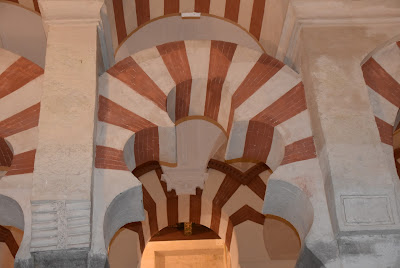 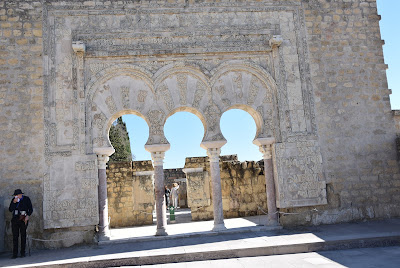 The excavations are ongoing and we started at the top and worked our way down a very steep slope. The actual excavations are more or less flat so it was only the access which was vertical!!

Earlier we had visited Alhambra which is really rebuilt. All the same it is gorgeous. But again too many people and they have had to restrict access. Nevertheless it is worth seeing. 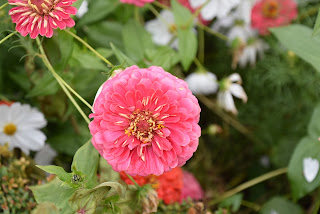 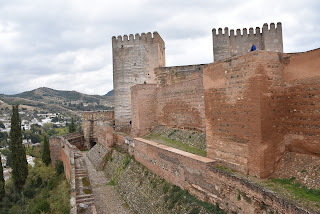 I should say we have had really good food on this trip. And tomorrow we are off to Seville..

Yesterday my book came back. This is a bound copy of Two Points East which has been away since April, touring Norfolk, being on show in 7 or 8 venues, The organiser included a flyer and a catalogue ( photos of every binding) and it was nice to see all of these in close up. Looking at the binding I am pleased. It is one of the best things I have done. Now I have to bind the author's second book on Norfolk coast!! There are some problems,
1) It is in the form sent out by the printer which means much folding and pressing - and then when sewn,
2)the edges need guillotining and I do not have one big enough.
3) Until 1 and 2 have been done, I cannot read it and so have no ideas on bindings.

Oh well, what would life be without problems.

The weaving is going well.
Posted by Pat at 10:51 No comments:

Working out what to do

I warped up with some of the charity wool which Rosie Price supplied. It has all been spun by Guild members. I have woven several scarves before and put on an orange-brown warp which called for 10 epi. I put on enough for three scarves. It was stripes of 4 shaft twill interspersed with tabby. And I can get several different drafts out of it without rethreading. I have some nice handspun grenn and started out with that. And had a great surprise. It required more like 20 epi!! The problem is that each spinner had a different colour and every spinner has their favourite thickness. Well that would not do so I hunted for something thicker and found it - Worked very well for the first scarve.

For the second one, I used a red chenille (see below). The pattern does not show up that well but better than the photo shows. 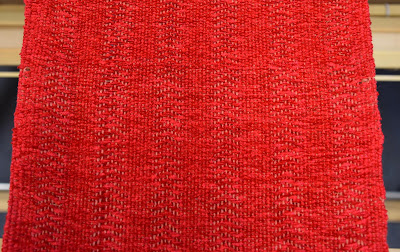 I have restarted my lino-cut class. Had a happy time printing many Xmas cards and then cutting a new block showing Battersea Power Station. Next Friday, I shall do a proof and finish cutting. I do like lino-cuts.