I do intend to blog more often

Yes I do. I write blogs in my head but never get round to putting the equivalent of pen to paper. Partly my sister has been persistently ill culminating in a bout of lung infection which needed antibiotics. She has not been eating much which in turn has affected her diabetes and so most of the time she does not feel well. The good side is that I have walked the dogs by myself a lot which is a good thing because I can mostly cope with Tome, my sister`s collie cross. His problem is that he does not like dogs larger than himself so he goes for them on the principle of getting in first. So he needs putting on the lead if a larger dog approaches. While Jerry loves every body and will approach a larger dog. He was growled at by an Akita and he was quite upset. You see `Nobody has ever done that before` written on his face.

I have done a lot of weaving and thinking about weaving. The Guild members have just started the Black Jack Game for 2022. This entails getting three random cards from you have to design and carry out a project. Weavers weave and Spinners spin. I have ended up  with a design which involves satin weave, rich dark colours and some fancy yarn. The yarn is Tencel + merino  yarn at 20/2 and space dyed in reds and dark greens from Joy of Yarns and I think bought at Tampa Bay Convergence some years ago. This is going to be interesting.

The Online Guild had January devoted to UFOs  and I accomplished two of my list of three, making the striped cotton fabric up into a giler. 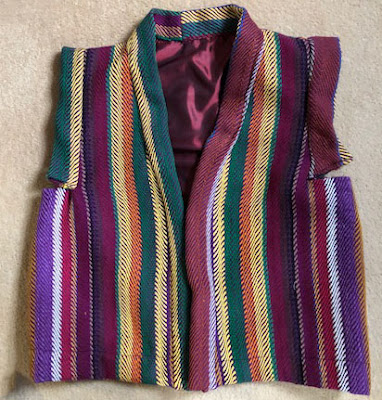 The fabric (from 8/2 cotton) was very thick and seams were difficult to machine. I did not like the arm hole facing. I thinking bias binding would have been better.

The second UFO was to examine my stash and get rid of some of it. Which I have done although I did find some projects which were collected together but not touched for several years. 2023 UFOs?