I spent a lot of time writing blogs - in my head and I never make it to the computer! So apologies. A lot has happened since the last blog published. We went on a cruise on the Rhine. The food was very good. 95% of the passengers were Americans and the whole thing was tailored to them. It ended up by me walking off from a guided tour of Speyer. Speyer has the largest Romanesque cathedral in Europe and the guide did not intend to go inside!!!! She said it was plain and boring. Sure it has no twiddly Gothic bits but it is gorgeous in its own way. Anyway we won because we spent ages looking round and then patronised a cafe in the market square where they made apple tart and kasekuchen as only a good German cafe can.

Everyone was tested every day on the ship for Covid and then we fought our way through Basel airport and went home with Covid. This was the German version which had us both very ill and testing positive for more than two weeks so that did a lot of damage to our plans for the caravan.

We got to Norfolk eventually and the temperature was not too high. but we did not have long there. We have not spent anything like the time we planned in Norfolk. We hope to get some longer visits in this year.

So have I done anything in the way of textiles. Well yes. I spent a happy day with the Guild chairman dyeing wool. I found several large cones of white wool yarn. I cannot see me every using that much white yarn so I turned one cone into skeins and one into balls and space dyed both lots with acid dyes. I was worried that some of the dye would be too old and not take. Well something labelled rust red  came out orange but everything else was okay. 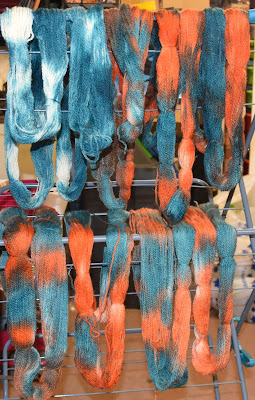 The balls of wool, all 10 of them, were dip dyed and took several days to dry. They were half dipping in bottle green and the other half in brown. Make a nice warp!

I finished winding a warp for the 8 shaft Schacht in grey 8/2 cottolin. I am now half way through threading up in a point twill. This will be another ghost warp. The one  on the Megado is doing well and the next project is a double weave blanket. Photos soon!!! I hope