Yesterday was spent battling with problems associated with sending a Convergence entry of yardage off to the States. First problem was that my Bernina was having a problem with the buttonholer and was at the service centre. They claimed yesterday that I had not given them the buttonholer so I fetched it back. I do not need the buttonholer for a few straight seams. I found the buttonholer in the carrying case in 30 seconds back at home. I was displeased.
Then to check the yardage for errors - there were none!! Just a few ends to cut off and to iron it carefully. But I could not find the email which told me exactly how to prepare the yardage for hanging. It is quite different this time. So I consulted with Cally Booker who has sent her yardage off. Poor Cally is unwell and on holiday somewhere within 10 miles of Cape Wrath. But a relayed message through her husband, Stuart, told me what I needed to know. I managed to get an email from the States confirming  the details. So it is done, wrapped up in black tissue paper (all neatly ironed too!) and on two rollers. All that remains is to get DHL to come and fetch this morning.
While rooting in the pile of unfinished projects looking for the Convergence piece, I came across this.

It was woven as two pieces, the lower one is seaweed on the wet sand and the upper one is sunset on wet sands. You can just see a darker thread which separates them.  Everyone who has seen it, says it should be left as opne piece. I would have done it differently if I had intended that and woven 3 or 4 inches fewer around the break. I have hemmed it and ironed it and hung it up at the end of the corridor so I see it often.
In between times I have been steadily weaving on the Megado. It is slow work and not helped by the fact that a lot of the handspun is Jacob and so is mottled. I had labelled all the weft yarns carefully but the colour matches are not good. Since this blanket is to be all of John Shailes' handspun, I cannot add in other yarn. Oh well. 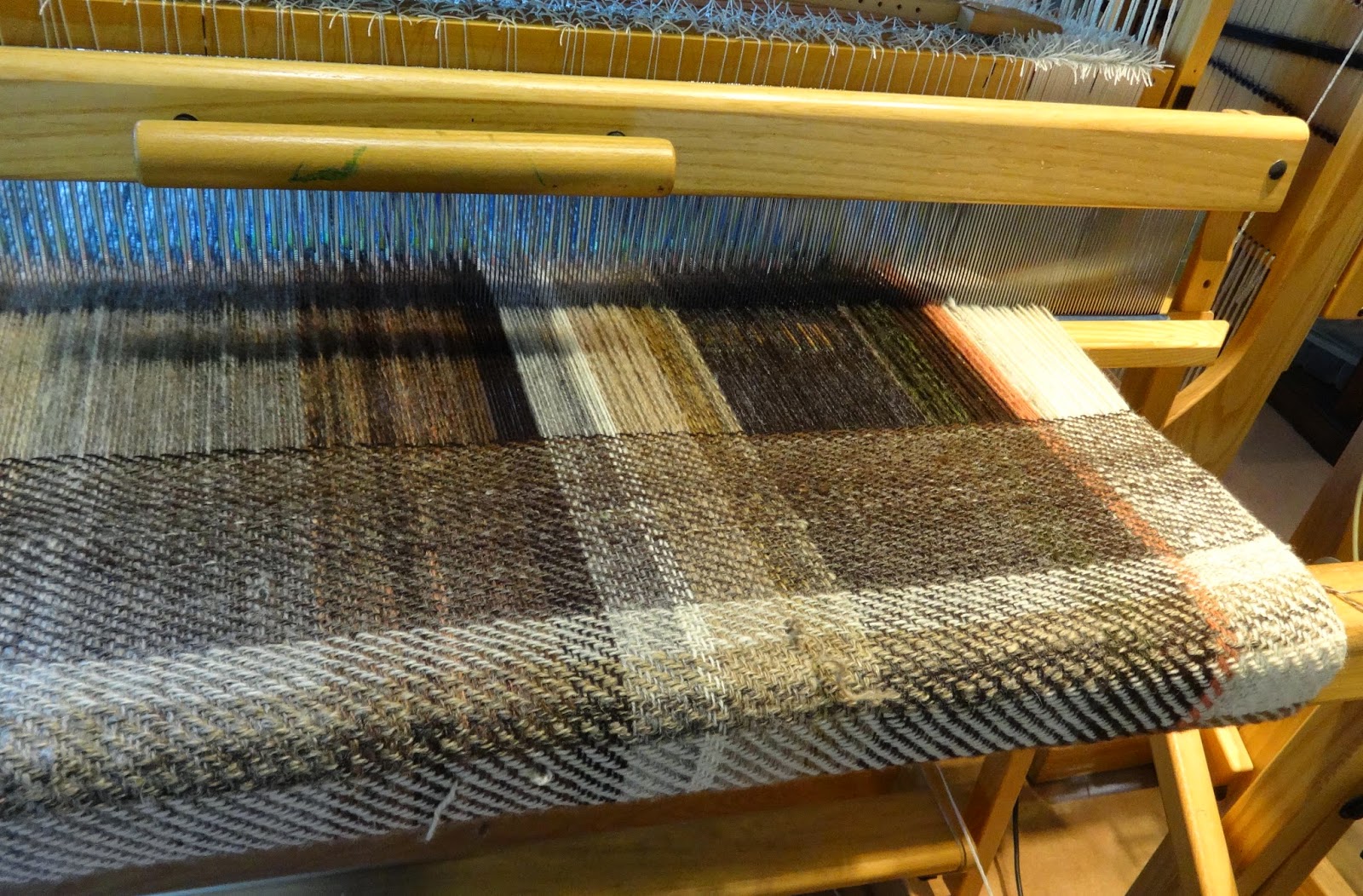 I suppose basically it all looks mottled. The white warp on the right is at the centre. The other half is a mirror image of what is shown here.
The weather continues fine as they say and I have pruned the pear cordons and the apple cordons. I still have the pear stepovers to do - today's gardening job, and the peachtree. I have never seen so much fruit on the pears and apples. They have formed in clusters of 2 or 3 on the pears and up to 5 on the apple trees. All now thinned down to one in each cluster. What with going on a long trip in 2013, they did not get the pruning they need and so there was a lot to do this time. I only have 10 pears and 8 apples, all cordons, but it has taken me 6 hours work.
Posted by Pat at 08:43