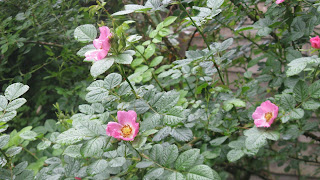 This is a species rose in the garden, very large and very spiky. I still have two more to come out.


Yesterday was a day of happenings. I have been ill for the last week and rather thought it might have to do toothache. This was confirmed at the dentist's who spent 40 minutes drilling holes in my jaw with cries of 'Mrs Foster, what HAVE you done?'. Another session looms when the current anti-biotics course is completed..

When I returned home, the computer technician appeared and it took him two hours to figure out what was wrong with the set up that it could not see the printers. Answer, you need to reset the printers to factory settings!!!! The even better bit came as he left with all the switches, cables and computer accessories which I did not want. Well 75% of them. The rest he said were out of date so they have been binned. I am rather pleased about this clearout.

After that, it was print, print, print. I have not had access to a printer since I returned from Shanghai. I have managed a major clean up of emails and answered all sorts of queries. Most of the work had to do with courses. I am running an Ikat Warping course in September, a Woven Shibori course in October and a Japanese bookbinders course in November. Two of them are completely dealt with, handouts written, everything organised. I have just started on the handout for Woven Shibori by firing an email full of questions at Wiltshire Guild. Not quite as much work as it might appear because I wrote a handout for a class held a year or two ago and that will be the starting point.

Now I come to think of it, there is a Guild acid Dyeing class in November as well.

On the textile front, I have discovered that, by getting a new cable, I can replace the current 25 year old large computer on the Megado by my laptop. So the cable has been ordered. I also ordered eight different colours of 30/2 silk from Handweaver's Studio on Wednesday and they arrived today. I should be able to get some weaving done today. I would like to get the waistcoat length finished before Thursday next week and have the warp for Dennis Walker's loom ready for that loom arrival on Saturday. He has very kindly lent me his loom for two weeks while I weave another 3 or 4 yards of fabric for my new jacket.
Posted by Pat at 09:25