I have finished the donsu samples for the Japanese Textile Study Group and have tried various other patterns and yarns. The result is that I am currently using a doubled thread of 90/2 silk in the weft which speeds up the weaving. 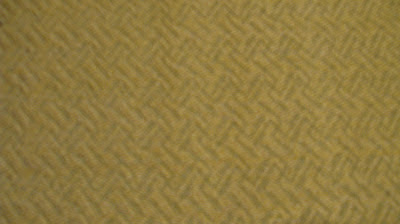 I then decided to weave enough for a waistcoat and produced a geometric design which results in more of a texture than a pattern. This is woven with a doubled weft. The other side is gold on green and also looks nice and I can't decide which side I shall use.

Here is a close up. Ignore the shadow at the lower edge. 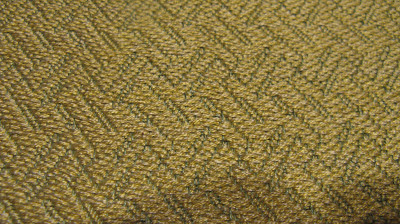 This post is entitled Solution which means I have worked out how to get the weaving organised. The donsu is slow weaving at 60 throws per inch and I will never get it finished in time to weave the length of fabric I need for July 23rd. Also I want to weave a piece for Convergence 2014 yardage and details are not likely to be published till August. So I have arranged to borrow for two weeks a table loom which is wide enough. I only need four shafts for the fabric and it will take no time to weave. I will wind the warp before it arrives and just devote myself to it for ten days!!!
BT came along on Tuesday and installed a Wifi hub. The result is that the laptop and two other computers are all speaking to each other and to the internet. I have switched off the two Linux machines, destroyed the hard drives and taken them to the tip along with a twenty year old enormous screen. I used that monitor but have moved Michael's very nice large flat screen into my complex of computers. The office looks bare! I am getting rid of loudspeakers, USB hubs et cetera on Malvern Freecycle and some things have gone already. So I am down to two computers and a laptop from seventeen which is what I had when Michael died. I still have a very large elderly computer running the Megado but am thinking of using the laptop for that. Then I could rid of the last old computer.
I still have things to do with the computers like getting a high class acrobat program, not just the reader which costs nothing. But today's job is to assemble the Shuttle, the Guild's quarterly Newsletter. I am glad about the weaving solution. I have been weaving all this week and do not have much to show for it.
Posted by Pat at 07:51