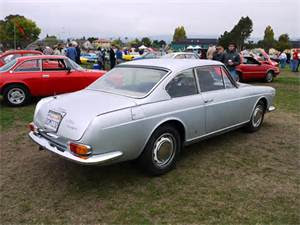 For some years I have been thinking about buying an elderly Lancia Flavia. There are problems of course. Lancias rust like mad and I have not got a garage to keep it in (it was made over into a dyeing workshop some years ago) and I don't fancy keeping a car like that on the forecourt. That means renting a garage which is a pest. I have been thinking this over and almost decided to just buy one and see what happened. Until today. My grand-daughter, Madi, let it known that, should I feel I wanted company to see opera in Europe, she would be glad to oblige. So we are back to the days when Michael was alive. One of the reasons we never owned a posh car was that we spent our money on opera in Europe. I am glad to oblige. I am missing live performances. This HD stuff from the Met is all very well but it is not the same. So how about Der Rosenkavalier in Vienna for starters with Renee Fleming singing the Marschallin? 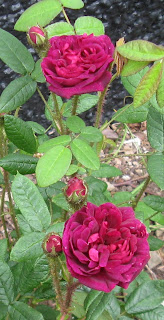 Returning to earth, here is another rose in my garden. This is a moss rose, Nuits de Young. The flowers are quite small, say 2.5 inches across. Plein de Grace, the large rambler, is starting to come out. It has maybe 100 flowers out. Tomorrow there will be thousands and I will take a picture. This rose is thug. The thorns are awful and I need to get into total protection to prune it. It is currently over 12 foot high and climbing up a conifer, not to mention swamping a six-foot trellis. I prune it every 3 years or so and it will have to be done this year.

I went over to Leamington Spa today and went for a walk with the family along the Stratford Canal, watching the narrow boats negioate the four locks at Lapworth and finishing up at a nice pub, The Boot at Lapworth, where we sat outside in the sunshine and ate a good lunch.


Yesterday I was at a meeting of the Midlands Textile Forum. We started with a long walk through a large nature reserve and then returned to a member's house to practise various textile techniques. Some people had brought their sketch books which I always find interesting. Why is it that everyone else's sketch book is so much more interesting than one's own? I did however see something that inspired a weaving draft and I must write that up tonight.

I have finished file tidying on the computers. All is now safe in that everything is on Dropbox and there are no duplicates. Another computer will be switched off tomorrow and taken out of the loop. And also tomorrow, I will weave up the rest of the spool of rust 30/2 silk and ordered enough more yarn to weave 3 yards of this design. It has worked out very well. And I plan to do some book binding as well.