I did a demo of space dyeing at Hampshire Guild on Saturday but did not steam them. As soon as I arrived home, I set the steamer going and on Sunday they were rinsed and dried. 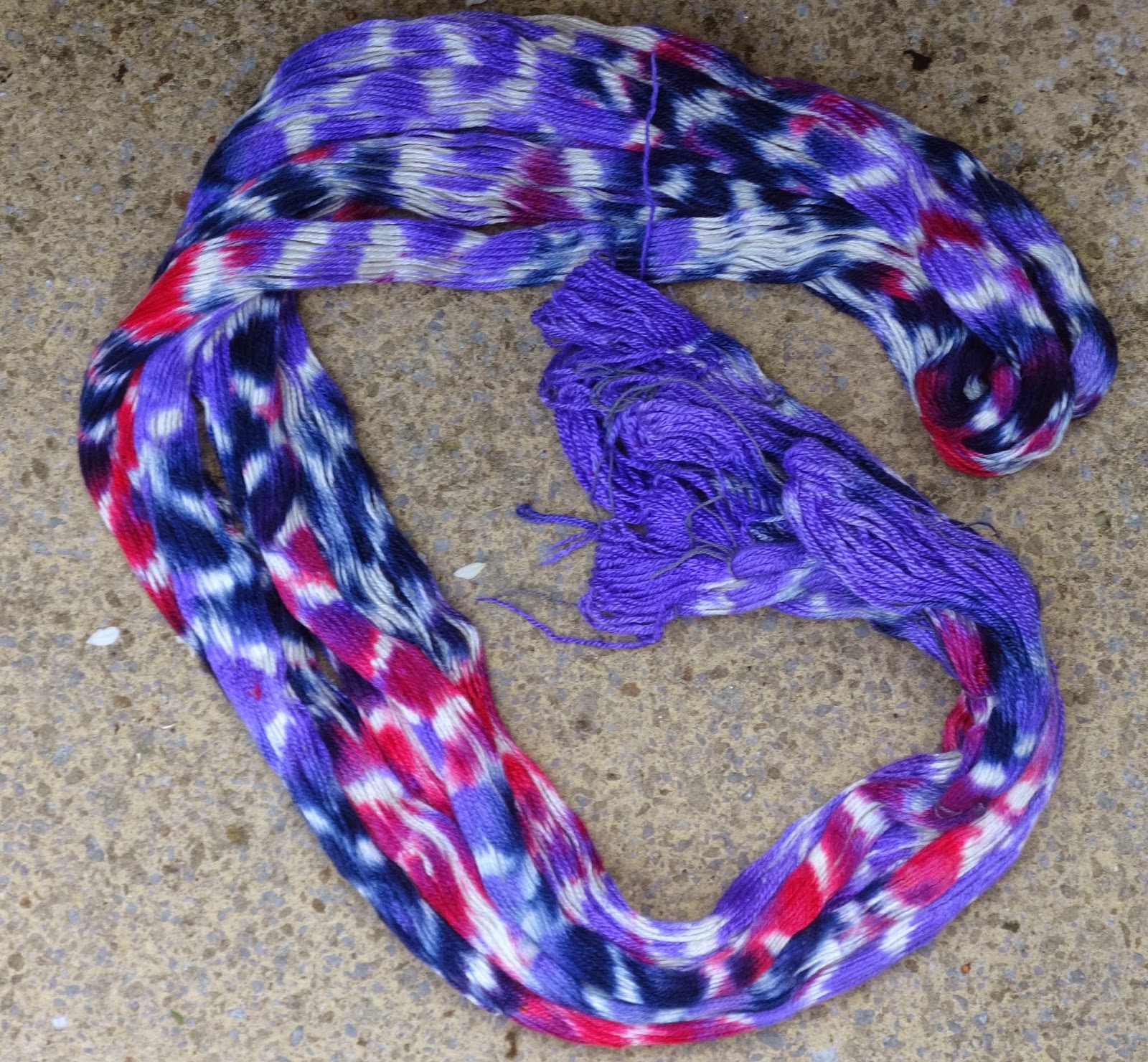 The warp was three identical warps in wool and silk (50:5)0, size 12/3 nm so substantial. I plaited the three warps together tightly and painted violet, dark blue and scarlet on the damp warp. It is a bit in your face. I will have to tone it down by using a non-white weft. I do have a lot of the same yarn in baby blue so I will try that but gut feeling says that will be too pale and I might have to dye the weft. 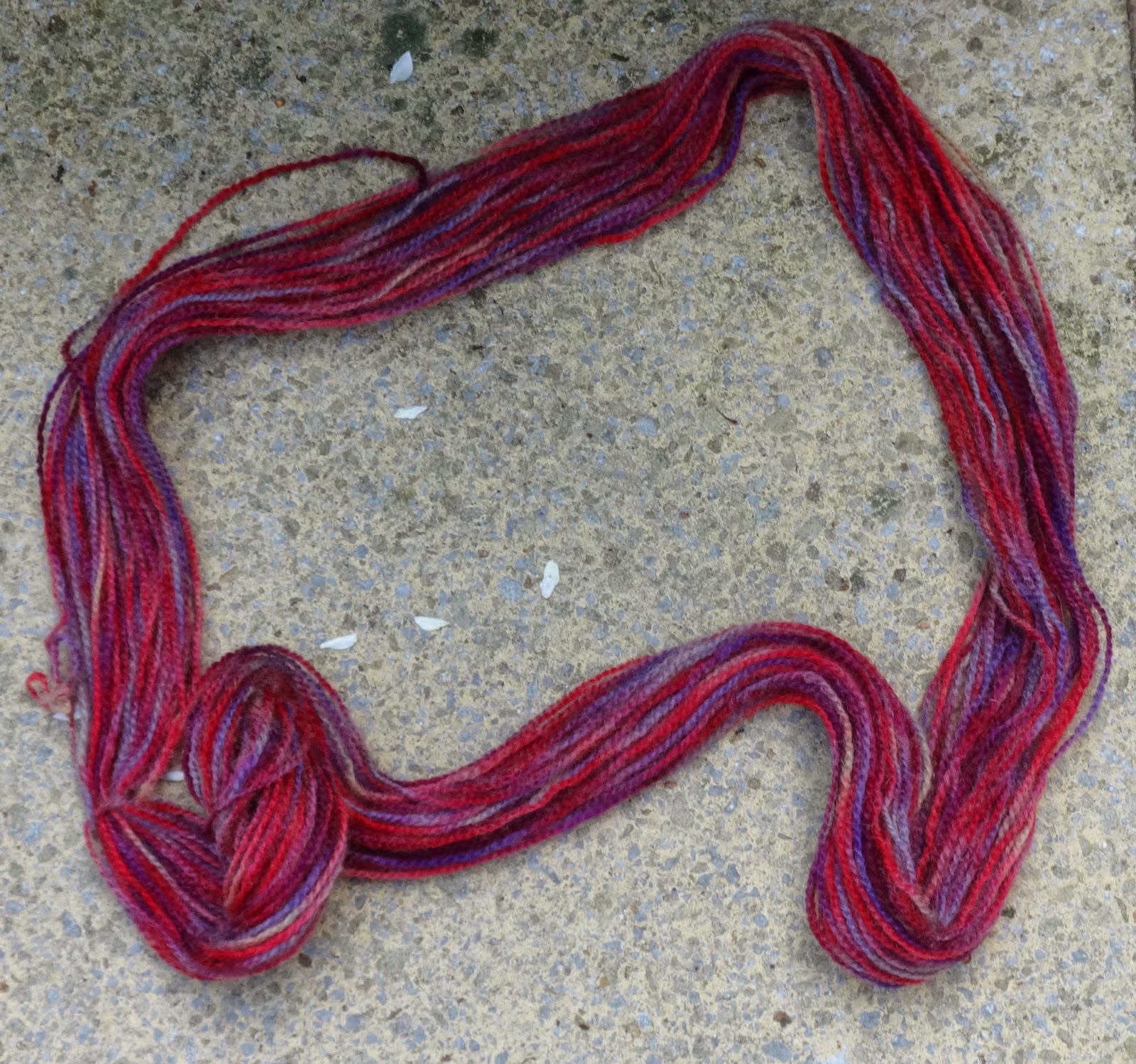 This was a spur-of-the-moment sample. I took along a ball of handspun, beige in colour - dyed with natural dyes. This was used to demo how to inject dye into a ball. This was done during the talk but, at the hands-on demo at the end, I showed them how to do it for real. Rather nice and the yarn feels lovely. So this yarn will be used to create warp stripes along with some beige yarn for the rest the warp.

I will put the series of photos about space dyeing on my website and will give notice here when it is done.

My current weaving on the Voyager is not going well. This has a  handspun warp in various shades of brown. Originally I was going to use the same yarn for weft but decided instead to use a brown silk noil which looks fine. There are two things wrong. First the threaded pattern is huck lace and this is a mistake with using various shades of brown. Secondly and much more important, the warp yarn is horribly sticky. I am using spray starch which does improve things but I am still checking each shed and half the time, clearing the shed before inserting the shuttle so this makes weaving SLLOOOOWW.  I get a complete pattern, five inches done in an hour. I was tempted to cut the whole lot off but decided no, I just will keep plodding on. I really would like to see it after washing. 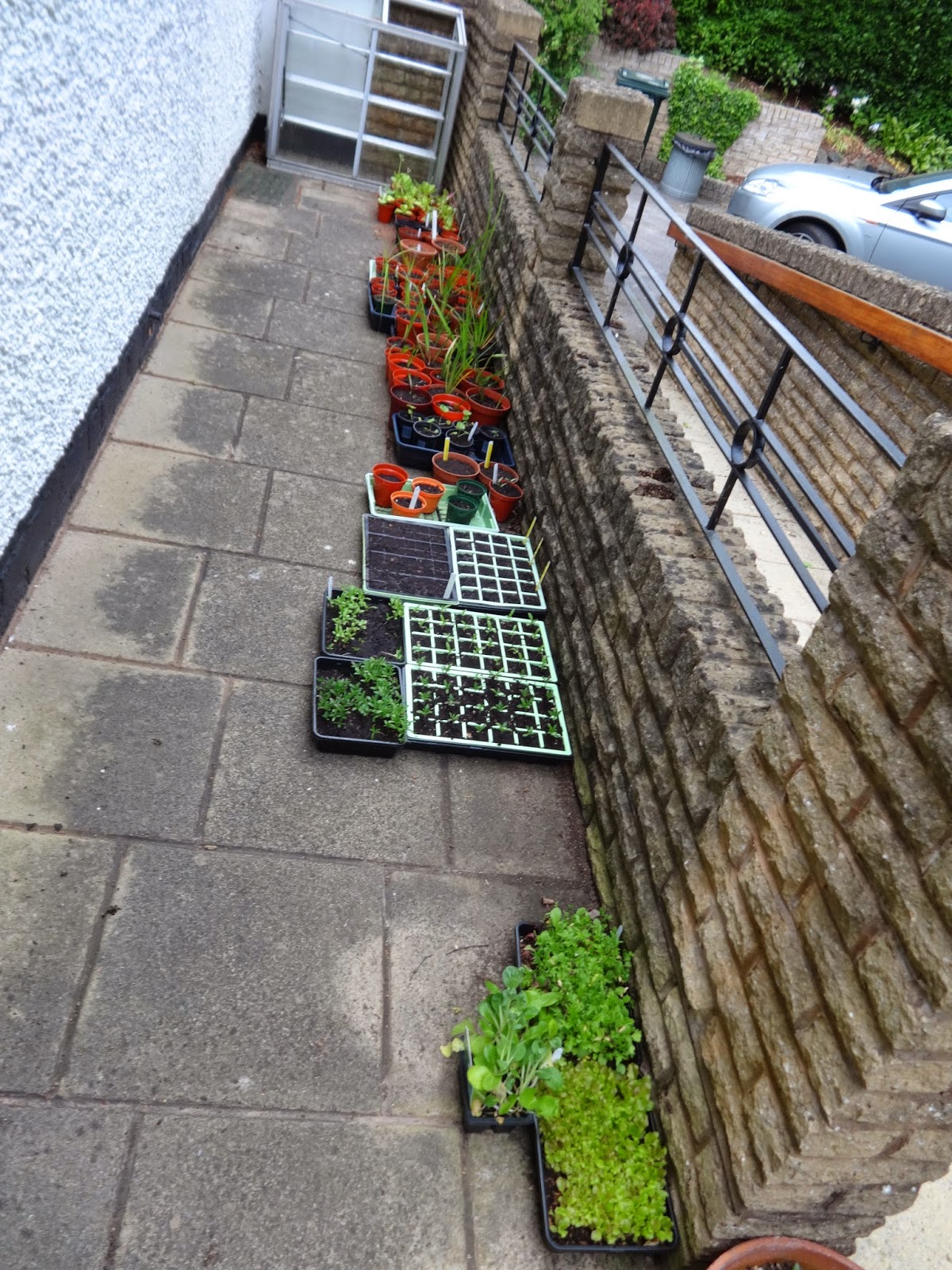 This has cheered me up. This is the result of a whole morning spent dealing with seeds and seedlings. The lettuce and pak choi in the foreground will be planted out in the garden tomorrow. Behind are potted up marigolds and Zinnias and other things and behind that with long straight leaves are all the irises which have been potted up today. Behind them are all my auriculas which have also been potted up. Tomorrow I have the vegs to plant out and more seeds to put into pots. Nothing like this lot though. It will only take an hour.
Posted by Pat at 22:17