Two Exhibitions and a Crab Curry

Yesterday I went through to Leamington Spa to spend the day with my daughter and her family - not Madi who is in Arizona. I must say she gets interesting school trips. The Grand Canyon and a dude ranch!! In the morning I went off to the Leamington Spa Art Gallery where there is an exhibition of art quilts 'Through Our Hands'. Even I recognise  some of the internationally known names. And it was all stunning. I talked about an exhibition at Redditch by the Kemshalls where I was not impressed. They had works at L Spa and they were very impressive. As were Elizabeth Barton's art quilts of mediaeval buildings at twilight. The windows lit up were done with tiny squares of fabric ( 1 or 2 square cms) in all sorts of shades of yellow and orange with spots of red and brown. Alicia Merrett had maps of villages. Linda Kemshall had two portraits in her quilt and the quilting made up the contours of the faces.There were 10 quilters in all. Anyone who canget  there should go.  It is on till 13th January 2013.


In the afternoon, we all went to Compton Verney to see an exhibition of tapestries from teh Dovecot Studios. They ran from a pseudo-mediaeval The Lord of the Hunt to pieces done last year by way of a large piece by Paolozzi and and a 1950 one based on a design by Bawden called 'Farming'. The first Archie Brennan was for Aberdeen in 1964 and was innovative in its use of different yarn types to get texture. There was a very 3D one designed by my hero Bernat Klein which included knitting, crochet and whipping. My favourite was 'Overall' by Harold Cohen. 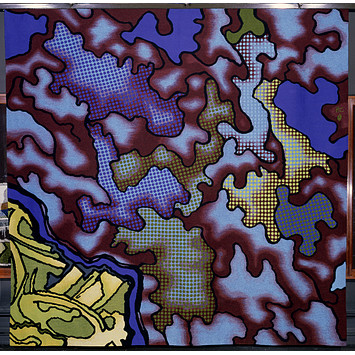 'Overall' based on a design by Harold Cohen 1967. No photos were allowed so I have downloaded this from the web. Cally Booker told me about this exhibition when it was on in Edinburgh. If you can get there, do so.


The local Guild had set up a tapestry loom and if you go on Tuesdays, Thursday or Sundays, you can have a go.

In teh evening, we went roudn to Kayal which is a good Indian restaurant and I had parathas and crab curry. All very pleasing and made a good end to a good day.
Posted by Pat at 14:40