I am  a very happy bunny. All sorts of lovely things have happened. I will pass over the air trip and just say I arrived at 9 am, was in the hotel by midday and out again, after a rest, at 2 pm. And then the fun started. 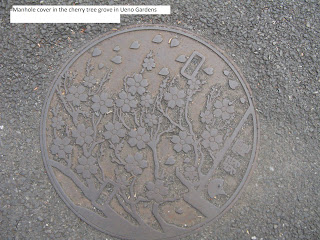 We went to Ueno Gardens and passed by a grove of cherry trees, okay in spring time, but in late September just dusty. But the manhole covers are reminders of cherry blossom!!
The gardens are dusty and not very green. There are many homeless living there and we saw an immense queue for handouts. Apparently a lot of homeless live in these gardens.
Also in these gardens, is the Tokyo National Museum. Marvellous and lots of textiles. 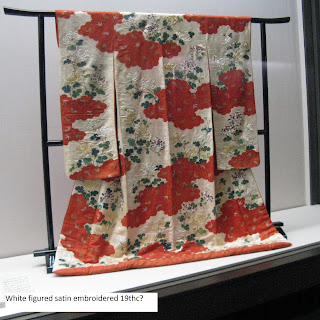 A kimono based on a figured white silk fabric which has been heavily embroidered. 19th century. There were 18th century kimonos with hevay embroidery. 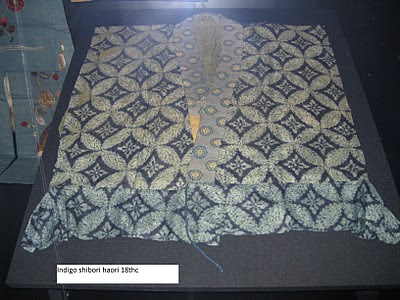 A haori (short kimono) of the 18th century in silk with the pattern created by shibori!! 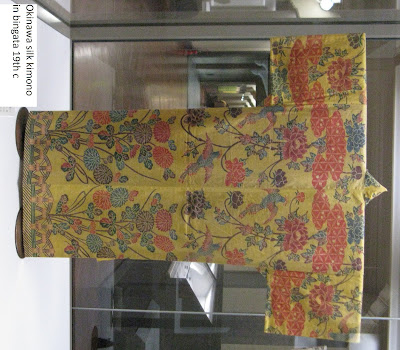 I am sorry this is sideways on but I cannot rotate it!! Anyway it is still beautiful. It is 19th century and one of the oldest examples of Okinawan bingata which survives. The Battle of Okinawa in 1945 bombed the textile museums to bits and rebuilding cannot bring the bingata collection back. The oldest examples are those which just happened to be in the Tokyo National Museum in 1945. It is created by stencilling - with many many different stencils.
There were several examples in the Museum. 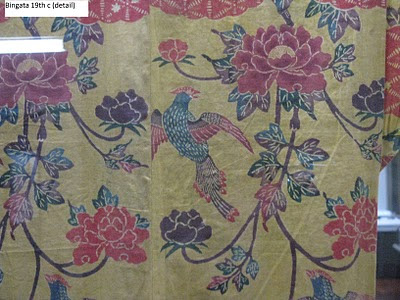 This is a close up of the kimono shown above.

There is also an exhibition of kabuki clothing which is very extravagant.


The Museum shop is great and I bought four books on textiles there - all in Japanese. This includes one which starts at the back (UK nomenclature) and reads forward. I worked on the assumption that I could probably tell what was happening from the pictures.

After examining everything textile in the Museum, we set off Northwards outside the Ueno garden to walk through a different district. Lots of small houses with pruned conifers in their gardens. No flowers and lots of overhead wires. Tokyo is very peculiar in that it is built on lots of levels. It is quite usual to look out of a window on the ground floor and see a three storied motorway outside - only one of the 'bridges' carries a railway. Getting around is okay although I managed to get us lost in a station once. We are using the trains and Metro a lot.

That was Friday. I will catch up Saturday tomorrow morning.