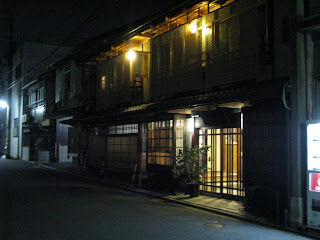 I have not blogged for several days because we werer staying at a Kyoto Ryukan which is a traditional Japanese inn. Tatami mats on the floor, take your shoes off at the door - and no internet access! 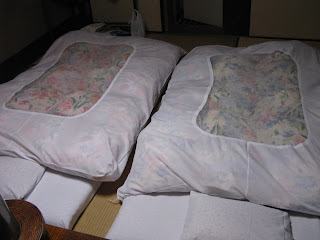 The beds are made up on the floor with tiny pillows. We slept reasonably but I would not want to stay there for more than two nights. Sitting was very uncomfortable. The place is built for people who can sit cross-legged on the floor which I can't.
However we did have a Japanese bath which was great and a magnificent dinner - another kai seki but much, much better. Everything very elegant. I took pictures of every course- all ten of them.
One thing I have decided is that I am reasonably broad minded about food and even prepared to try chewing octopus but I draw the line at Japanese food for breakfast, particularly noodles. I have ended up with a serious hankering for bread and marmalade and a bacon butty. And a piece of black pudding would be good too. 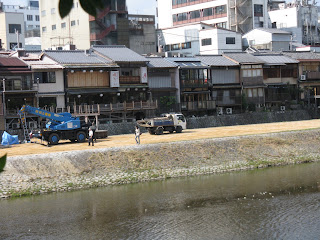 This photo was taken across the river at Kyoto and shows what Kyoto houses are like. It is a most attractive place. I could have done with another few days there.
Early this morning, we took the train from Kyoto to Osaka and then flew to Okinawa - and then, most exciting, I drove a hire car into the centre of the Naha city. The hotel has a strange car park system. You drive the car onto a set of rollers, get out , lock up and it ascends to the heavens. 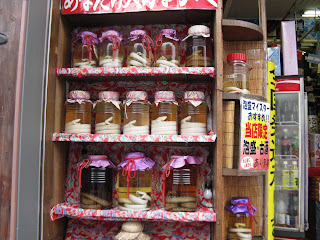 We then went out for a walk in the city. Lots of nteresting textiles which surprised me. I have discovered several good places to visit tomorrow. We took in an exhibition in the City Museum of items from the Sho family - who were the kings of Okinawa until about 1890 when the Japanese invaded. There were three kimonos of bingata which are lovely - never seen anything like them before and they are all 18th century.
We walked through  a good market, vegetables, fish - and these snakes. Quite repulsive. Okinawans consider them a delicacy. Maybe but, for me, they have just joined noodles for breakfast as a no-no.

We have found several places where you can do a session on bingata and also hana-ori (weaving). Tomorrow we are going to set out to one of these places early and see what we can manage.
Posted by Pat at 12:56