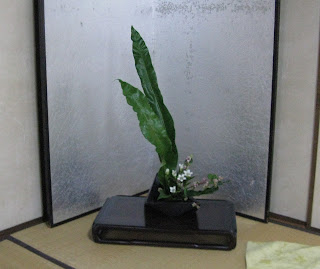 Yesterday we spent the morning having a lesson in Ikebana. We were collected by a lady in a kimono and driven to the outskirts of Kyoto, up in the hills. We werer a bit puzzled by her presence but, when we arrived, it became clear that Fumiko Morikawa, the teacher, did not speak any English. She (Fumiko) provided lots of diagrams and, at the end, several pages in English of explanation. It all seemed a lot less complicated than I have read in books.
She demonstrated one first - the house was full of elegant arrangements - and then we had to do it!! The photo on the left is of my efforts. 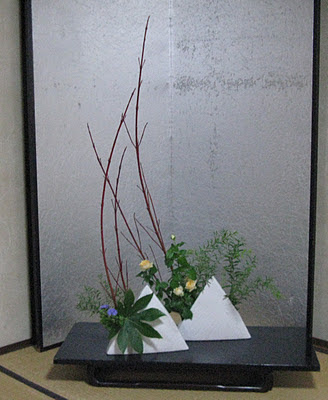 We then did one each in a very peculiar shape of vase. This photo is of both arrangements.
It has to be said that Fumiko would clap her hands to show how clever we were, then tweak everything a bit, when it would look ten times better!
We put the two first arrangements into oasis wrapped in special coloured plastic which was tied up with gold ribbon and took them back to the hotel where we have a very wide window sill just suited to flower arrangements. One thing is clear. These arrangements are one-sided and need a background. She had several alcoves round her house each with a different background, sometimes a painted scroll, sometimes tatami matting.
Ruth is determined to have a go when she gets home. I might. I think that finding the right containers and backgrounds might be a problem.
﻿
Posted by Pat at 00:20