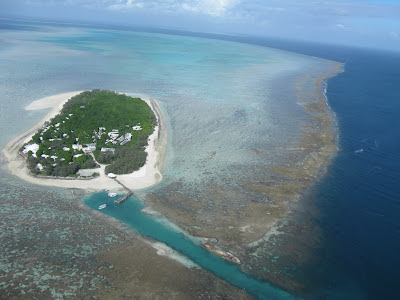 On Thursday 5th April, we left Heron Island on a helicopter - which was a good opportunity for an aerial photo of Heron Island. It was low water and you can clearly see the reef - and the only channel into the harbour.
The helicopter only took 20 minutes in place of the more than 2 hours by boat. We then had to wait in Gladstone  for a plane to Brisbane, which was late, just caught the Sydney flight by 1 minute or so (but our luggage did not) and arrived at our Sydney hotel, very late and minus luggage. It did turn up next day lunch time.
Gladstone is a mining/natural gas town and late afternoon on Maundy Thursday, the airport was heaving with large men in hard hats going home for the holiday week end. 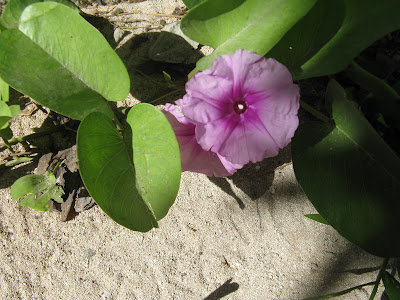 This looks like a Morning Glory but is not going by the leaves. The flowers are bigger than one of those anyway - at about 4 inches. A lovely colour 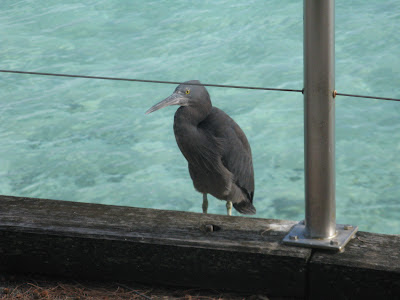 This is what got Heron Island its name - but actually it is an egret not a heron. There are many of them, both grey and white.

We have 'done' the Opera House and the Botanic Gardens which are bay side. Today I took everyone to Bondi Beach and Chris and Madi had a surfing lesson. The Beach was full of families with loads of children. We had an Italian Lunch on the beach which was very good. But I am being cleaned out by the costs. The smallest round of food for the four of us costs  $100.00 which is more than £70.00.  So three meals a day and a round of icecreams costs me over £250.00. I can see a serious retrenchment taking place when I get home. Bread and water for six months.
Tomorrow we have a cruise organised which is paid for. I shall encourage everyone to eat as much as possible.
On the textile side, I have created several good drafts for the Diversified Plain Weave on the Megado. One lot is for 2012 Christmas cards. Another lot is a whole set of fireworks. The Midlands Textile Forum has a big exhibition in November on the theme of 'Festivals' and I thought a piece 2 yards long of fireworks would be interesting. The orginal warp length was 11 yards and I have used at most 2.5 yards so plenty to play with.
Posted by Pat at 09:47