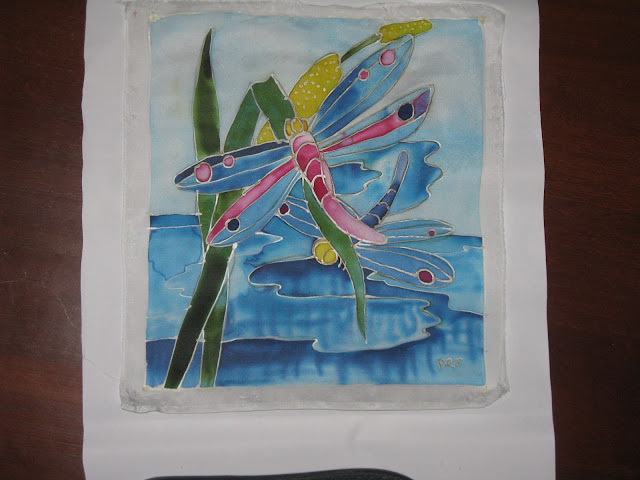 Yesterday we went to the Krafts Komplex and had a session doing batik. The tutor provided three or four Lever Arch files of designs, all about A4. Having selected one, we had to trace it onto a silk square stapled tautly to a frame, then draw over the tracing with a tjanting full of wax. Then paint it! The above is mine. What was unexpected was that the colours were much brighter after being set to dry in the sun. We were  also given bookmarks each with a piece of batik on it. I bought two more 'chops' (metal printing pieces to be dipped in wax and print the batik design on to cloth) for my sister. I shan't be back so must make the most of this trip. Robin, my son-in-law, and I have got much better at assessing chops which are all old and second hand and we rejected quite a few.

Later in the day we went to the cinema (dreadful film called 'Battleship') and then to a dumpling house where we met an old friend of mine from my British Aerospace days and gossiped about people and places. He is currently building a railway for the Malaysian Government.

Today we are going to an elephant sanctuary . Should be good for photos.

I seem to be thinking about projects to be done when I return. I had an idea about a length of Diversified Plain Weave I wove some time ago with a feather design. It is only a metre long and so is not much good for anything. My latest idea is to weave some more using the warp currently on the Megado!! I created a new draft this morning. Then I can make a waistcoat. Simples!!

I have also thought up something which I can submit to the Association's Biennial Exhibition. There is a class for anything contained in a six inch ring. I have checked on deadlines and I have just enough time once I finish off what is on the Voyager. I am going to use the 120/2 silk. I have been wondering what to do with for some time for that will be interesting Double weave with warp and weft interchange..
Posted by Pat at 03:20