I finished off the rainbow scarf on a silk warp and took it into the Guild's Show and Tell on Saturday. Spent the day gossiping which is one of the advantages of not being Chairman. I had a great time. 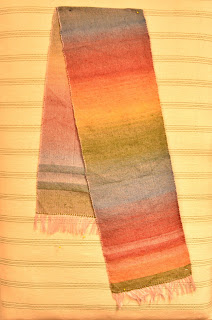 The photo background is not very suitable and has swallowed up the blue. I started the next scarf which has a weft of a boucle cotton and linen mix. I have no record of where this came from but it has clearly been dyed in an array of light blue shades. I have overdyed two balls  of the yarn a darker (solid) blue. 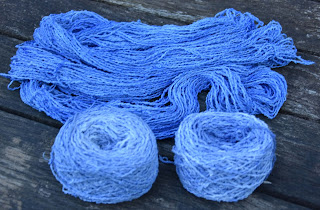 The originals are the balls in the foreground. I will create a few stripes of darker blue amongst the mainly lighter yarn.

I have also wound 6 warps today. My next project which  I have a deadline for, is velvet about which I know nothing. I did acquire velvet rods a year or so ago but I need to start. Some months ago I bought Deb Essen's book which contains a section on velvet. The book (available from Interweave) is not what I expected. It is a set of projects, one of which is velvet. I read this with care twice last week and decided that rather than set out to adapt it to my requirements, I would start by carrying out her velvet project. Hence the 6 warps, one for ground and five for the pattern (velvet). So I selected suitable yarns, roughly corresponding with the author's, wound the warp and wound it on. This did require that I dismantle the Louet Kombo. It was last used with a fan reed and has to be unscrewed and re assembled for normal use. It is now all set for threading up tomorrow. 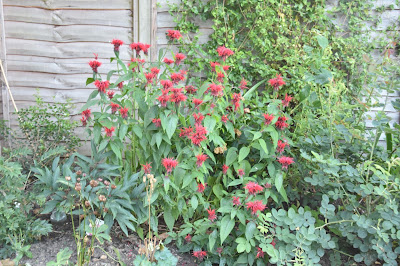 The above is our monarda. Last summer it was half the dimensions. This year it is five foot and has been in flower for three weeks. It will go on until September.

And for those of you who follow this blog regularly, the zinnias are coming on very nicely.