This blog contains nothing about textiles but is about my family history. So you have been warned.

Life has been hectic for the last two days. Yesterday we walked up to the Mall from our hotel in Shimla. In theory it is flat. In practise that is a euphemism for not so mountainous as elsewhere. A mile walk took 40 minutes rather than 20 and we actually walked 4.6 miles and up more flights of stairs in the Municipal offices. In other words Shimla suffers from a serious case of verticality. For instance, a signpost says Police Station  and points uphill but the signpost says, not miles but 160 steps!!!

The reason why we were in the Muncipal offices was that my family lived in India since the Mutiny and ended up owning a house in Shimla. My granny lived there along with her two sisters in the 1940s and we used to visit in the summer time. I knew what it looked like and that it was on Jakhu Peak. I thought that, with an owner's name, someone might be able to identify the house. I did not expect that the house would still exist since there was a lot of land round the house and there are blocks of flats everywhere in Shimla. So we set about the Council offices which consists of half a dozen blocks of four storeys and we first looked for the planning department who sent us to the Deputy Mayor's building where someone sent us the Commissioner (MC) - top floor on another block. They do not believe in lifts! At this point, our luck turned. The commissioner could not help us but he had a friend who could and rang him up. I had a long talk to him and really he could not help without a house name or number. Which we did not know. So I thanked every one and one of the assistants followed me and said that I was wrong about the house being knocked down because a conservation order had been slapped on Jakhu in the 1940s and it was not allowed to knock any building down. Why did I not go and look?

In the afternoon, we got a car and driver from the hotel and found what we think is it. See below.
So two happy bunnies! But the drive round Jakhu was horrendous. Zigzag roads which needed a three point turn at every bend.

There was a catch to the day. We had flown from Delhi to Chandigarh and that airport had closed the airport on Sunday and our flight was cancelled. Great kafuffle with Cox and Kings and we ended up with air tickets for today instead of tomorrow and now have an extra day in Delhi on Sunday. We are now back in the Leela Palace. Fortunately we had done the most important things in Shimla and can do the rest by email.

The weather was beautiful coming down from the mountains and I got a lot of photos see below. 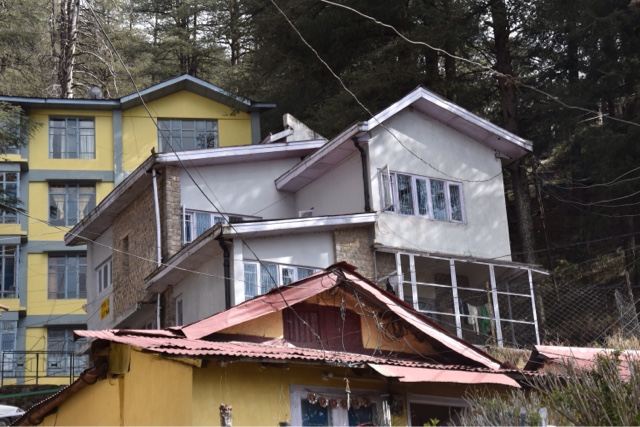 It is the white one. 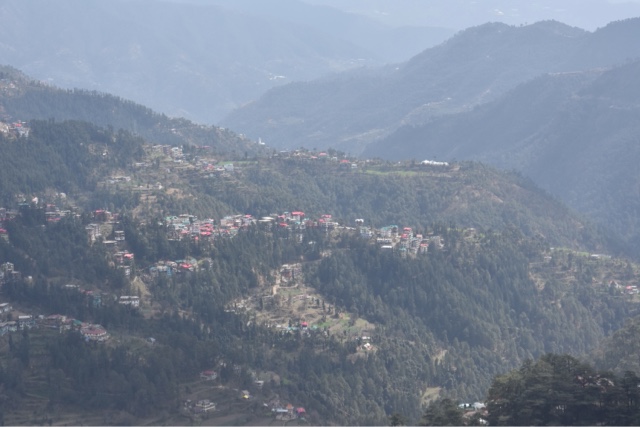 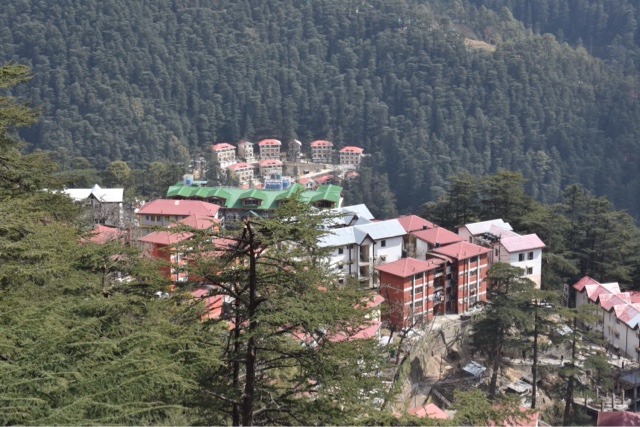 The landscape round Shimla.
Posted by Pat at 12:31