Grandmothers should not  be taken to rock concerts even when their grandsons are singing. Too loud (Why aren't they all deaf?) The balance was dreadful - I was brought up to believe that a vocalist and the accompanying instruments should be a partnership, neither should dominate. In this concert, all the instruments played as loud as they could. Two hours with my fingers in my ears. Bah!!

That was Sunday. On Monday I had lunch with some old friends near Malmesbury and went for a walk in Westonbirt Arboretum afterwards. 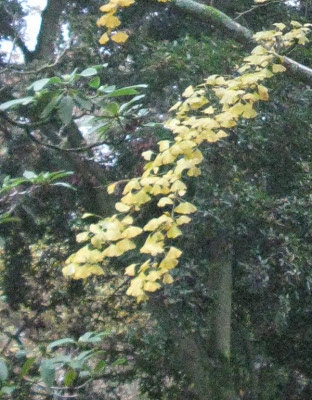 The maples were all over but there was still a lot of autumn colour - including this gingko tree.


Came back home and got to grips with the drafting session for next Saturday.  I put in a bit of time and left it. At 10pm I had a thought and took the presentation up again. I surfaced at 0130 which is a bit late for me and then stayed in bed until 10 this morning. I am not sure that it was a good idea but I have an awful lot of the work completed.

I have not done any weaving or textile work for what seems like weeks. And there will not be much opportunity to do any until Sunday. On Monday I am driving to London to pick up a new loom from Wendy Morris. Now I know bought a 12 shaft only a few months ago but this one is totally different.

My mind works rather oddly and I am quite liable to have an idea out of the blue and then I have to work out how to accomplish it. This idea was definitely of the technically difficult sort. Eventually I remembered that Wendy Morris had once bought a very odd loom from NorthWest looms which might be just the thing. Not at that time knowing the name of the maker, I asked Wendy - who turned out to be thinking of getting rid of hers!!So I am picking it up next Monday. It is apparently quite heavy so I have to drive into the middle of London to fetch it. At some point I need to decide what to do with the new 12 shaft loom. Trouble is, I have a use in mind for it with a class for the New Year, probably for several months. I don't want to get rid of it but I need to think of somewhere to store it. I will then have five looms. Megado, Kombo, Voyager and the two new ones and only the Megado and the Kombo have 'homes'. I am also storing the Guild's 12 shaft loom - needed for the same project in the New Year. Not my project. I am going to warp up both 12 shafts with a four colour double weave and let the 'improvers' loose on the two looms. I did this with one loom at the beginning of 2012 with Diversified Plain Weave and I could only get enough warp length on to allow every one a maximum of 30 inches. This time, they will get 2 yards each.

Going back to my Malmesbury friends who knew Michael through work, I told them about discovering that Michael had worked on the great Aircraft Control program - which I never knew until after his death and told them of the stories I was told when I inquired about this of Michael's work friends. Yesterday it turned out that they knew about this and made a great speech about how first rate Michael was and how much very high class work he had done in software. Some very flattering things were said. I never knew! Of course I knew he was very bright and it took many years for me to face the fact that there was nothing I could do that he could not do better if he put his mind to it. Fortunately he was a very tactful person. I remember a very strange meeting many years ago when a young man connected with work came round and I realised that the conversation was very peculiar - almost as if they were sizing each other up. Then I realised that the young man was as bright as Michael and suddenly I could no longer understand the conversation. They were off - somewhere else in the world of ideas. It must have been a very lonely life.
Posted by Pat at 12:39