Study Day at the Ashmolean, Oxford 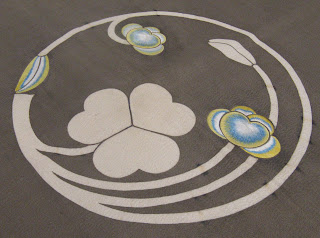 The Ashmolean Museum is currently holding an exhibition of Meiji Textiles and ran a Study session there today which I attended. There were 12 people and it was held 'behind the scenes'. We were issued with gloves and a pencil and had all other bags etc confiscated. We were allowed to take photographs. The pieces we were introduced to were, of course, not those on exhibition but are from the same period. Most were embroidered but  a  few were woven or stencilled/dyed (yuzen). This is a fukusa (gift wrapping cloth) in silk with the light coloured cloth stencil led and the other parts of the motif embroidered in silk. 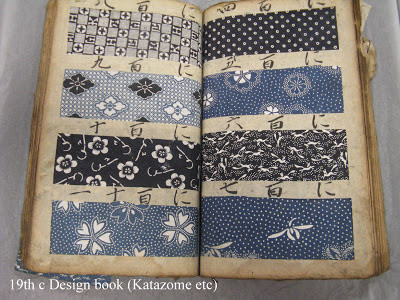 There were two pattern books which had samples stencilled on to paper. These patterns look like katazome where the stencil is used to put a pattern of rice resist onto the cloth which is then indigo dyed. All the patterns in both books looked like they were indigo dyed. 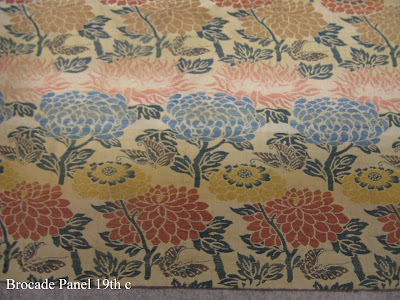 This piece is woven silk. The back is woven too and not left with a mass of long floats. Could it be woven on a Jacquard loom or was it done on a drawloom? Very attractive either way. This was about the only woven piece in the  11 pieces we were shown. 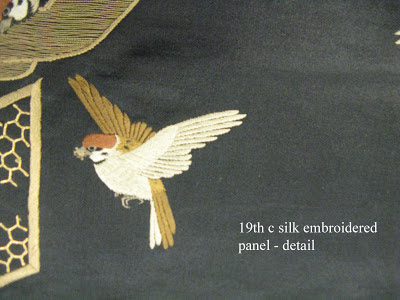 This is part of a large embroidered hanging. The bird eating an insect is about 2 inches square. Beautifully done. But the panel is too twee in its entirety for my taste and that is true of much of the exhibition. A lot of the exhibition was made by Japanese workers for the Western market which may account for the degradation from earlier textile work.

I had an exciting time with travel. It was bucketing with rain first thing and my train to Oxford was cancelled so I decided to drive to Oxford which took about 2 hours. All okay except that I got very wet getting from the car park to the Museum and then back again. On the way  home across the back lanes of the Cotswolds, I had to turn round in a narrow lane and return to Stow because the river was so high that it was too dangerous. Indeed I could not have tried it if I wanted to because a Mini was parked in the middle of this mostly under water. The owner and various people were standing around in the rain discussing what was to be done. So I drove home a longer way through Evesham which had the advantage of passing my favorite farm shop.

So if you are only interested in weaving, I would not bother with this exhibition and, as I said above, the designs are slightly twee. There is however a wonderful exhibition of Edward Lear.
Posted by Pat at 17:23