On Monday I drove to Handweavers Studio in the middle of London to pick up a loom. That statement hids a multitude of sorrows. The first problem was getting away from Malvern and across the Severn. After an hour or so I was still within three miles of home having given up on going North and knowing that going South was under water. There is no where to go East as there are no bridges in that direction. So I went West and got involved in a very large traffic snarl up - possibly because that it the only way into England!! The bit of the journey I was not looking forward was in London itself but that was no problem at all. Neither was getting through the middle of London to fetch up at Ruth's house. It had taken from 0845 to 1340 to do a journey which ought to take two and a half hours. The loom was duly loaded at Handweavers Studio  and is now back here - by way of Compton Verney.


I drove up from Ruth's to the Gallery on Tuesday morning and met up with soem members of Kennet Valley Guild to see the tapestry exhibition. We hit it lucky - there was a conducted tour at midday and it was very good. So after that and lunch we did teh exhibition again and then the Folk Art galleries, then tea, then home. It was a great day out and I learnt so much more by having the tour. By the way as we walked into the Gallery we met four members of Berkshire Guild doing the same as us. 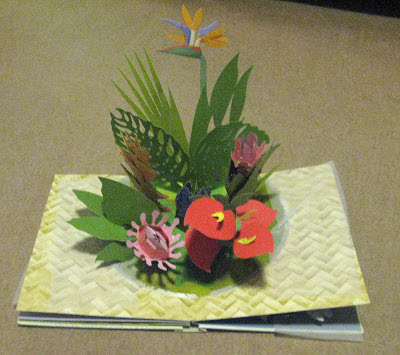 I got home to find the above waiting. It is one piece from a Popup book - an early Christmas present. The flower arrangement is 12 inches across! The book is intended to be used as though each set piece was a flower arrangement - you can see the basketwork background. There are six different flower arrangements in th beook. All very clever.