I thought I had written up Thursday but it seems I have not. Four of us from Kennet valley Guild went to Birmingham to see a Kente weaver at work in Birmingham Art Gallery. It is part of the Style Africa exhibition which I have written about before.


Talking to the curator, apparently turned up on Tuesday and built the loom from bits of wood. That's what it looks like too!! He had a 240 ft warp which was wound in Ghana which is done by stretching it between two posts in a straight line (a lot of walking involved there). The warp was coiled up neatly in a yellow plastic crate which was weighted. It sat on the floor and teh warp went up to a horizontal beam about 4 foot off the floor then down at 45 degrees to a breast beam in his lap. The woven cloth was wound round this breast beam. I rather like the set up because you can see much more easily what is happening. There were two shafts connected by a pulley and then two ropes hanging down which were foot operated. He wove very fast. All very interesting. Then we looked at the exhibition and admired all the fabric. Did I say this was all mixed up with the Queen visiting round the corner at the Town Hall. When we left BMAG, she had gone and in her place were new graduates and their families clutching certificates, wearing gowns and mortar boards with beaming families in tow taking photos.


We adjourned to the Rag Market which the others had never visited. I rather think it won't be the last visit either. Lunch at Yo Sushi which I love then back to the indoor Rag Market and home on the train. 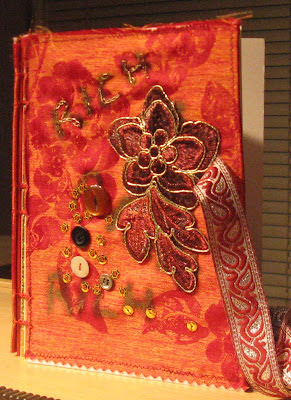 Yesterday I was at the Bournville class and decided I had to deal with one of Annette's brown paper bags. Every now and then, she gives everyone a bag of stuff and we all have to make something from it. We also got a  word. this time. Mine was RICH. Keeping to my plan of not making another wall-hanging, I decided on a Coptic bound book. Since I had fabric, I used FAST2FUSE which is like heavy Vilene with glue on both sides. I cut, stamped and embroidered the covers, then ironed the fabric on to the FAST2FUSE - a total failure. The stuff is over five years old so I suppose it was to be expected. Anyway I had to stitch it on. It is okay but the top and bottom edges are fray-ey so I need to blanket stitch it or PVA it or bind it or something. Below is a view of the spine. I have used guard papers of different colours and kinds of paper. The ribbon will be secured with a magnetic clasp - when I get one!!
The cover is not a great success because it is not stiff enough and pulling the thread tight pulls on the covers too much.