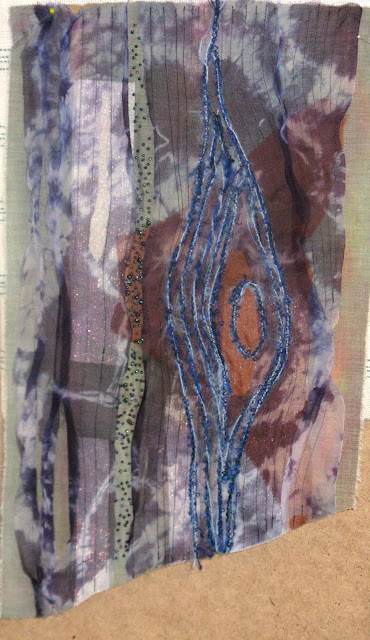 This is the piece of bark complete with tiny beads sewn on. The beads are quite glittery and look much better in reality. The glitter does not show up well in the photo.
That was about the only piece of textile I touched yesterday. The day was devoted to paperwork and accounts. Today I have to go and fight with Barclays Bank who have been telling lots of people that I am dead. This has two effects (apart from depressing me). The first is that they have returned all money to my pension providers so there's no money coming in and the second is that the said pension providers have been writing to my executors offering condolences and demanding to see my death certificate.
A telephone call resulted in a man called Richard (sounded very Indian to me) who did not/could not help. I rather think I may be changing my bank. However the first thing to do is to get them to cancel the fact that I am dead. I could do without this. One death in the family is quite enough.
Posted by Pat at 07:16