Dorothy and I spent the day in London yesterday. We went to two exhibitions in te British Museum. One was about recent underwater excavations near Alexandria, beautiful sculptures, even a large wooden one. Wooden things do not usually survive but this has got submerged in mud and so has been preserved. And several basalt sculptures including a lovely lifesize hippo! We also yhad a look at the BM's show of French drawings. Lots of Watteau (lovely) and 19th century (not so interesting)

On our way back to the Underground station we passed Cornelissen and I took Dorothy in. She was as bowled over as I was first time (and later times too). Though the paints are very expensive. 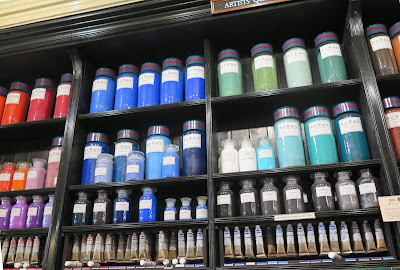 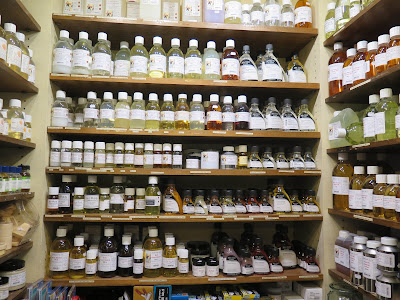 Then it was off to see the David Hockney show at the Royal Academy. The lift was out of operation for maintenance and there was no way Dorothy could manage the four flights of stairs so I went up be myself. About 40 portraits with the sitters in the same chair and  solid colour backgrounds (different for each sitter). The faces were well done and detailed but the clothes were just blocks of solid colour. I was disappointed.

Then home by train. I should have said the temperature was 32 and the underground was unspeakable. Outside in the sunshine was not too good either.

Today we have been occupied with workmen. An electrician came to rewire the lighting in my bedroom. Some weeks ago it went off with a very loud bang. All is now well. And later a gardener came to see if he wanted to work for us. I hope so as he seemed quite knowledgable.
Posted by Pat at 12:13