It has been a busy few days. In fact I cannot list what I have done. Just touch on the highlights. Sunday was spent teaching Fibreworks to some Guild members. Time was spent round the table peering over students' shoulders at their drafts. Some nice drafts resulted. I have  done quite a bit of weaving and today I joined Dorothy in the garage to do dyeing. Definitely an experimental day.    I found a black cotton Tshirt which I decided to screen print with a bleach paste, and I added a black viscose Tshirt to the experimental pile. After screen printing, they were allowed to dry. Then they were steam ironed. The viscose one went pear shaped or rather patchy and was dumped . The cotton one looks successful. It was carefully washed and hung on the line outside.

Another experimental action was to syringe dye four balls of Hampshire hand spun. I have nine balls in all (600gms) and might do a couple of scarves with a mixture although the yarn is quite thick. But the big problem is that I used red and blue and overdid the blue so I do not have a white with red and blue skein but a blue skein with small white and red blotches. 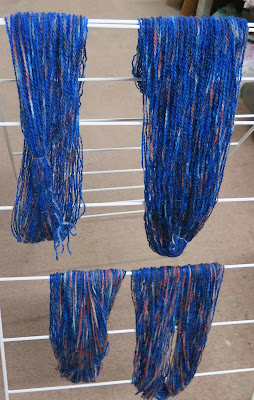 The last experiment is to do with bookbinding. I would like to have the word NOTEBOOK on the outside of some of the books I make. So I had a Thermofax made with that word on it in several fonts and sizes. The experiment was intended to let me decide which version I want to use but also to try the Thermofax out of handwoven fabric. Which I did. In fact everything worked fine and I am pleased at the results. 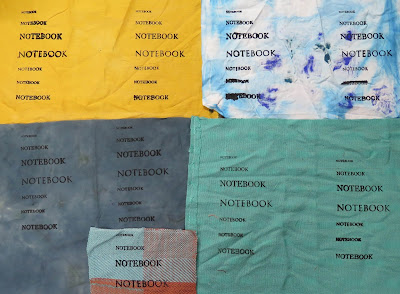 Printing on various fabrics. The two bottom right are handwoven. The rest are discarded commercial cotton overdyed and stamped.

The morning was spent installing a new shelf in the greenhouse. I am running out of space for potted up plants. We have delphiniums, oriental poppies, rudbeckias, sweet williams and loads of irises in the greenhouse. Well the instructions were good but think IKEA flat packs only assembled standing on a step stool and leaning over the staging and the estimated thirty minutes took two hours.