On Tuesday Janet Dunbar and myself made the long hazardous journey into the North - beyond even Manchester. Our goal was Burnley where there is a Museum of looms and a steam engine to run them which was in full howling when we arrived. 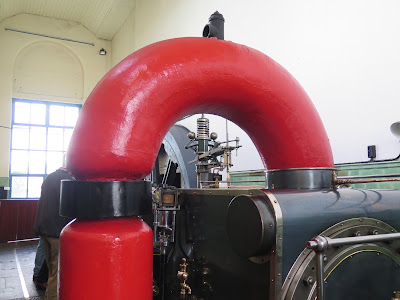 It was very well looked after and everything that was brass was polished, everything else was painted and it gleamed. The museum seems to be entirely staffed by volunteers. All the ones I spoke to were ex-mill hands. Of course there are only one or two mills left. This one is exactly as abandoned in the 1980s. The steam engine originally drove all the looms in the weaving shed  but now only drives a few at a time. 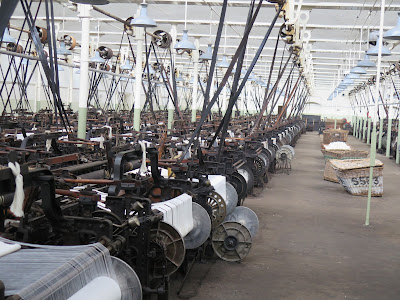 There are 14 looms to a row and between 20 and 24 rows - so 280 or more in the room. The noise was awful. The looms are driven by leather belts going up to the ceiling where they are attached to a rod running the length of the weaving shed. That rod is driven by the steam engine. The rest of the mill was taken up with machinery to help with speeding up the preparation for weaving. A creel and a device for winding through a reed onto a warp beam was used to prepare the warp which was then taken to a machine which tied the new warp on the old one automatically. At this point we were flummoxed as to how this operated and I went in search of a volunteer who turned out to be a mine of information. He had been a mill hand for over 50 years! And had ended up as an expert knotter. The first question he asked was why are you interested so we explained we were weavers and that I often tied warps on but did it by hand and got the answer And do you use a silk knot or a dog knot. The answer was (when he had told me what they were) I used something in between. Well he was not having that so we were taught how to make a silk knot. And taught to make heddles which was wonderful. Quite the most useful technique I have learnt for a long time. He could see I was taken with this so he insisted I practise. I can do it now!!!!

There was lots more to see 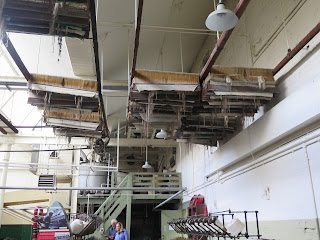 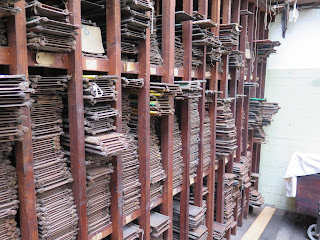 Dusty, rusty reeds and shafts full of heddles hung from the ceiling.

Today (Thursday) we went to London to see two exhibitions. The first was Abstract Expressionism which means Jackson Pollock and the like. I had trouble with this exhibition. I could take the Jackson Pollock but, for 90% of the rest, I was trying to turn the painting into images - and failing. My problem is that I do not know what I am looking at. Dorothy had no problems.

Then we went to the Victoria and Albert  and I went the Ove Arup Engineering exhibition. It was good but very small and covered only 5 or 6 of his projects. All in all a disappointing day.
Posted by Pat at 21:44