Two Weeks to Myself

The next two weeks I have to myself. Yesterday I went to shop locally and also shopped in Ledbury to post parcels and cards and to buy the last few presents. I have not been to Ledbury for some months and it seems to me to be even more upmarket than it was. Where else in the UK would you find a small market town with five real butchers and two real greengrocers on the High Street, nevermind the fabulous Italian deli and a chocolate shop wher they make their own? So all is done and dusted for Christmas - except the cooking.

I have done as much as I can to repair Webster's Dictionary until the next session in January. I inspected the two other two of my books under repair on Tuesday and decided the only way forward was to make totally new covers. They are both covered in bookcloth which has disappeared in places. But the front of Oglivies Encyclopaedia (1894) is heavily ornamented and my tutor told me I could get it off. I was very dubious about this but tried. The procedure was to lay the front cover, decorated side up, on a tray and cover it with a damp teatowel overnight. And it worked! It just peeled off! 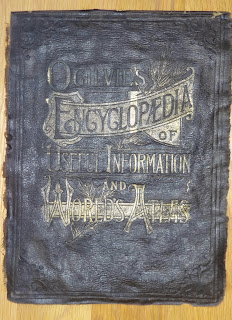 Here it is. I can trim this and paste it to the new cover when the book is completed. I also found a Christmas card pasted to the inside front cover which I have managed to get off. Not what we would call cheery as a Christmas card. 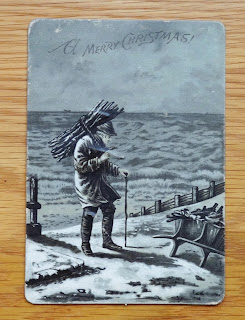 It is the size of a modern postcard. 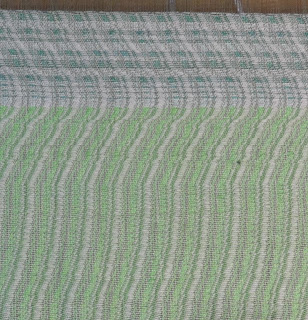 This is the silk warp on the Megado woven as a turned four colour double weave. This will be used as the cover to 'Sweet Thames, Run Gently'. This has a weft of white and green 30/2 silk. I intend to weave the Convergence piece in two shades of silk noil which is thicker and will be faster to weave. At least I intend to start that way. The distance between the ripples is about half an inch. 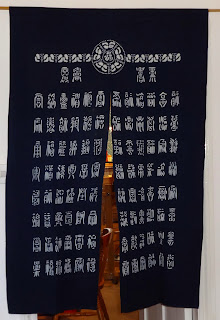 I have replaced the Kyoto noren which was in handpainted hemp with this cotton Chinese one which has 100 characters on it, everyone saying Good Fortune.