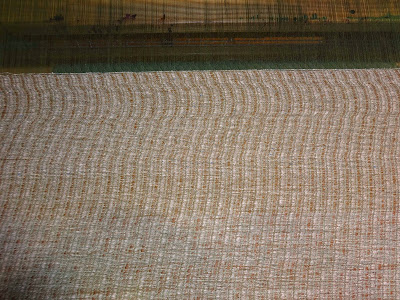 This is the Convergence yardage on the loom. Sage green silk warp (90/2) with two colours, natural and brown, of silk noil in the weft and yes the draft was designed to have wiggly lines. Here is a blown up version. 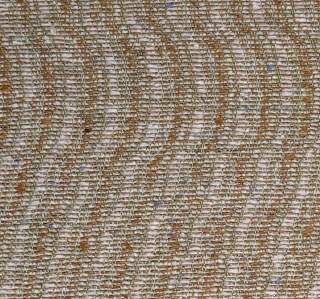 If this were being submitted in the United Kingdom, I would call it 'Weston Super Mare' but that would mean nothing to non-UK resident. So I might call it 'Ripples on the MudBank' but that does not sound very attractive. The title for Convergence Yardage is 'Ebb and Flow'.

I have taken photos of my poor eucalyptus which is leaning over alarmingly. I have had a letter from the Malvern Hills District Council saying my request to have it down has gone to the Planning Committee and I will hear the result on 13th January. I just hope it does not come down by itself before then. My trouble is that this is a Conservation Area and the tree is a very big one. The whole of the lowest three feet of the trunk is rotten. I am sad. It was Michael's tree planted 25 years ago. He decided he wanted a particular eucalyptus in that site - a Snow Gum - and we made two visits to Wisley to inspect their collection of eucalyptus trees before a Command Decision was made as to which species to buy. The tree surgeon says it has honey fungus so I will not plant another tree there.

Still we have an even older tree which was his. When we moved into this house 30 odd years ago, my daughter, Ruth, gave Michael a birthday present of a Picea Breweriana = Brewer's Weeping Spruce. It was two foot high and just sat there for three or four years not doing anything which was very worrying. Then it got going. It is now 20 foot high and beautifully shaped. 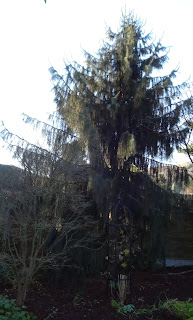