Kennet Valley Guild is working on a major joint project for the Association's Exhibition in May 2014. This involves lots of weavers weaving and lots of spinners spinning. I seem to be squashed between these groups! But first the weaving side. Rosie Price has bought cottolin in four colours and we are warping up four looms, each in a different colour. It is a longish warp - enough for lots of weavers to weave a suitable piece for the project. And it was agreed that the threading would be a straight draw on four or eight shafts. The idea is that each weaver selects their own draft. I put a red warp on the Voyager and threaded up as overshot, then wove it red on red to get texture. 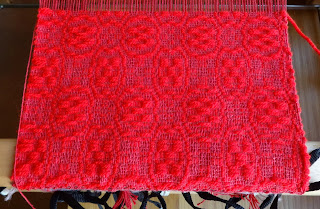 It seems that one or two other weavers would like to use the same threading which comes from Marguerite Davison's book and has six different treadlings. Anyway I have done my bit.

The other way I am involved is not so painless. For the project, it is necessary that the yarn produced by the spinners should be dyed the same colours as the cottolin yarn the weavers are using. I have done colour matching several times before but that was always just repeating an initial recipe rather than trying to get a colour match to an existing colour. So I consulted the expert, my sister, Dorothy, and was told what to do.  I have produced six sample dyed skeins in various blues  and I know what I did to get each. The skeins are drying at the moment but it is fairly clear where the colour I want lies. That took all afternoon today. And I have another three colours to do. And the family arrives on Tuesday. So I need to start early tomorrow and try and get the other three colours done.There is a lot of doing nothing while the skeins are steamed. The method is sufficiently interesting that I am recording it carefully and will write it up with photos on my website.