A Little Bit of Dyeing 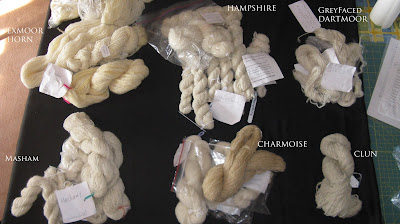 About last November I suggested that the spinners of Kennet Valley Guild might like to spin a bit of several different types of fleece and I would dye them and we would see ﻿whether the different fleeces took acid dyes differently. Well this happened and all the skeins were returned to me by mid February. I intended to acid dye them. The weather has been too cold for working in the garage. BUT, if I don't return these skeins at next meeting (next Saturday), then they won't be returned till July. So yesterday I organised it all. Every skein was given its own label, a length of cotton tape knotted to the skein which has the fleece type and the spinners name on it in permanent ink. 19 spinners took part and  six different fleece types were used. The photo above shows the undyed skeins and the fleece type.
Today I set about dyeing in the kitchen. The first thing was to cover everything with plastic and then carry in the equipment. I  chose 7 colours (basically a rainbow) and one of each type of fleece was taken to form one dye lot and so 5 or 6 skeins (all different) were dyed in the same dye bath. I have been working at this since lunchtime and have done 5 colours. The first is dry already and they will all be ready by Saturday. Each lot takes more than an hour to complete. The results from four dye baths are shown below. You can see clearly that there is colour variation. All the skeins were washed in Synthrapol before starting the dyeing process. Sue Davies of the Guild will be presented with these on Saturday. She has a team of knitters lined up and they are going to knit diagonal squares, six inches on a side. All will be sewn into a blanket. As you all know, I am not a spinner but some of this handspun is  absolutely smashing and I will have to see if I can persuade someone to spin me enough to weave a scarf - or three. 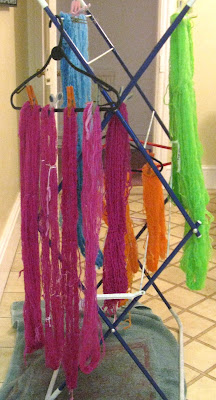