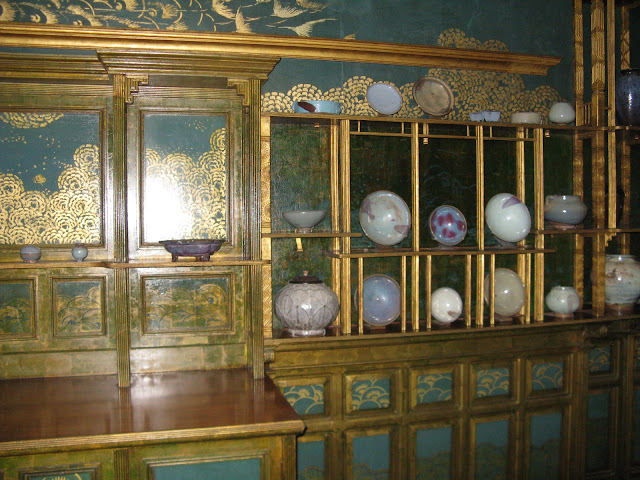 On Sunday, 16th September, a bus took a party of Complex Weavers into Washington and dropped us in the Mall where I headed for the Frier and Sackler Galleries which are Far Eastern Art. The Frier also contains the famous Whistler Peacock Room (see above). I was surprised at how well this photo came out given how dark it was. 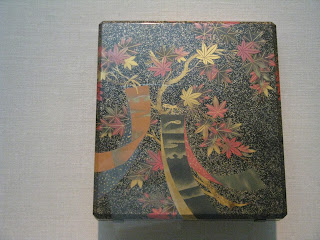 Everything in the Frier is exquisite, the very best of its kind. This is the lid of a lacquer writing box. It is about ten inches square. No textiles though. The Sackler next door is a bit different and has travelling exhibitions. A lovely exhibition of Indian manuscripts with beautiful miniature paintings - and magnifying glasses to examine them with!!

Then coffee and a muffin in the Smithsonian Castle next door where the pot plants and the gardens are very striking. All along this section of the Mall, all the spaces between the Museums are filled with little gardens - and seats to rest on. Lots of lantana in flower. I have always loved lantanas and have tried to grow them but failed. Very tender.Which leads me to wonder whether they treat them as a bedding plants here. They would not survive the winters in Washington. 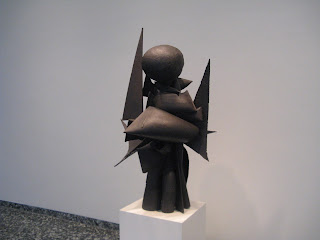 Then to the Hirschhorn Scuplture Gallery full of
spectacular things - and they allow photography!! This is by Robert Muller and is about 30 inches high. The interior contains mostly small things but by Henry Moore, Jean Arp et cetera etcera. 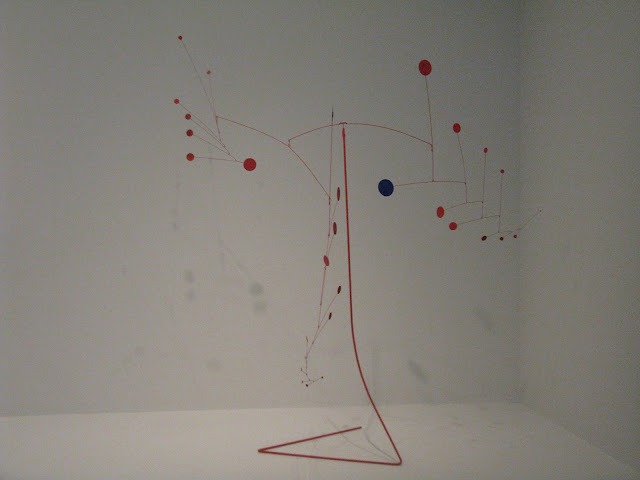 And a whole room full of Calders!! I was surprised that the photo came out well but it has. Just think of a large room with six of seven of these!! There were a number of modern paintings as well and outside, there was the Hirschhorn Scuplture Garden full of glorious things, though these were mostly not modern.

After that I went to the Museum of Native Americans. I did not have much time there and I am not sure I like it. It was difficult to find my way around as it was mostly full of special exhibitions. There was one on The Horse. I wanted to look at the baskets and the weaving but did not find a display devoted to these. By this time, it was time to find the bus again and go to the Textile Museum where we had a lecture on South American weaving and then a conducted tour of an exhibition about Nagas and Dragons. The exhibition was on the fact that most cultures include dragons. So there about 20 pieces from the Museum's collection which related to dragons and simialr mythical beasts. These ranged from a Chinese Imperial robe with dragons everywhere to a Japanese banner woven with gold paper thread and an early Coptic piece with a Nereid riding on a water dragon. This was linen warp and wool weft in white and dark brown. There were woven carpets and batik pieces and - - -. Interesting with every item a masterpiece of its technique. Then off to the shop. You don't want to know about that!!

After that it was back to the Conference Center and then off to Hyattsville to stay at the Marriott. But we took in a Thai restaurant which was excellent. The Marriott is on the campus of the University of Maryland and seems a bit odd.  It was very quiet. There is a Starbucks and the hotel restaurant in another building across the way. But no bar.

I did not mention that on Saturday evening a group of us went to Bethesda (a few miles away) and had a first-rate meal in a Tapas bar along with two bottles of wine!!