View from the Megado 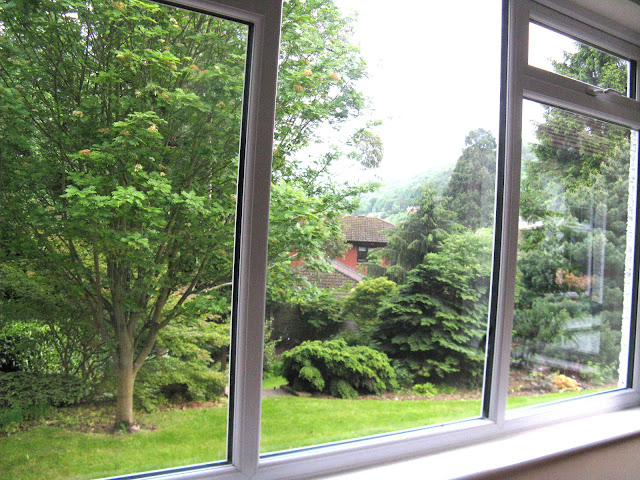 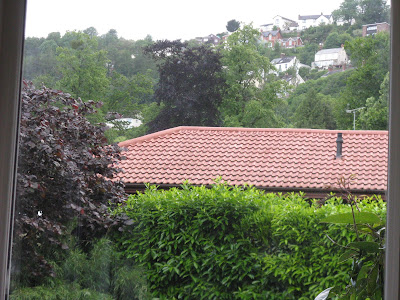 The top photo is the view from where I sit weaving at the Megado, looking out over part of the garden. In the background, all green and tree-y are the Malvern Hills. And the second photo is what I see if I look straight ahead over the Megado. The Hills are very obvious. Where there are houses on the skyline is the Wyche Cutting which is part of the old salt road. As far back as Roman times, pack horses carried salt from Droitwich over the Hills by way of that cutting and on into Wales.


Lots of people have responded to my recent emails and someone pointed out that how you approached this problem, depended on whether you were trying to make a living out of your craft. Now I would hate to be a production weaver. The way I look at it, you have to economise on effort and one way is to put on very long warps but, if you do not alter the threading, you are in for a very boring time. And changing the threading takes time. I know of people who put on warps of upwards of 40 yards using a sectional warp beam so you would get something like 25 scarves - or 50 tea towels out of that. My worry is that unless you manage to change the weave between items somehow, you cannot claim that yours is an unique product when a potential customer asks why she should pay so much when she can get a cheap one in M&S.  One way is to space dye the warp which is extra effort.

In addition, you have to weave something which is either very simple or something you are very familiar with - which leads me back to the dilettante approach to weaving- which I freely confess is my approach.' That would be really interesting to try. I wonder if it would work.'

On another tack, not that different, I have been thinking about pricing. The Midlands Textile Forum has just finished an exhibition in the Birmingham Bullring and there were many lovely comments in the visitors book and from the visitors themselves when I talked to them. But very little was sold. The wrong venue? No people around with surplus cash in their pockets? Where would you have to go to find such an audience?
Posted by Pat at 20:34