The View From the Megado 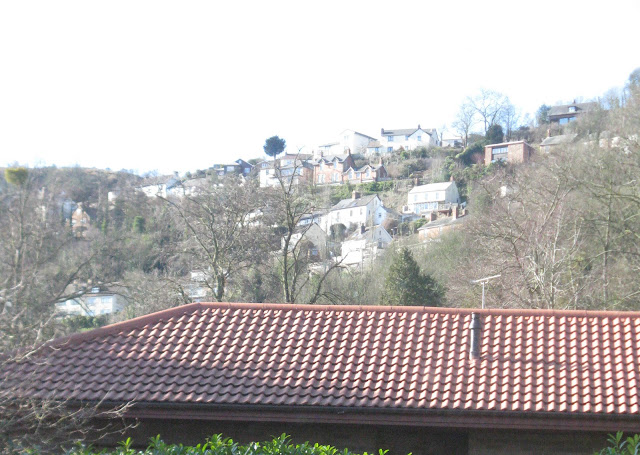 If I sit at the Megado and turn my head to the left, this is what I see - houses climbing up the Malvern Hills an, of course, the roof of the house next door which is higher than us. The little edging of green at the bottom of the photo is the top of the separating laurel hedge - which is 10 foot high on my side!!!
Yesterday I went to a meeting of the Midlands Textile forum in Birmingham and visited the Rag Market. Everyone else at my Bournville class talks about what bargains they get there so I decided to case the joint. I spent less than fifteen pounds and came home with 100m of cling film, 100m of parchment, 10 metres of 4 inch wide yellow ribbon for the blanket, 10 metres of narrow black ribbon as well as two pairs of fabulous Tokyo-style knee-his. The latter came in packets written all over in Russian!!! Don't ask. And there were other oddments too. It is a great place of yardage - but it is mostly aimed at the Indian market and is chiffon, taffeta et cetera. The ribbon is to die for - especially if you want bling!!!


The weaving on the Megado progresses. I have woven more than four feet and and more than half way. The meeting yesterday was a bit of a shocker - I have a lot of weaving to do before I leave for  Australia. So the Megado must be finished.
Posted by Pat at 13:07