And the Napkin Itself 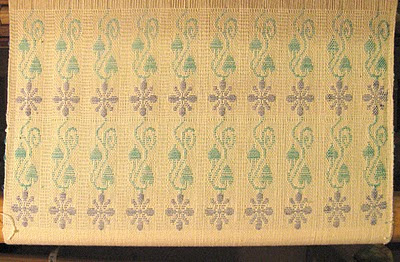 Yesterday was spent getting the draft for the napkins right. I had to re-do the draft to start with to fit onto the threading that I now have. I did not like the first two drafts as the lines in the leaf section were too spindly so revamped the whole thing removing one of the three leaves and making the other two bigger as well as thickening up  the twining shoot. The photo shows two repeats woven .The napkin has three repeats and a final flower to make it 20 inches square  and I have completed one. This took all of yesterday!! Another four to go!
I must see to a few other things in the way of paper work and go to Bourneville class this morning. Then it will be back to weaving!!
I have done one useful thing which has been greeted with enthusiasm by my daughter, Ruth, who is coming to Japan with me. I suddenly thought at the weekend that it would be nice to see some flower arranging. So I emailed the travel agent saying 'It's a bit late but - - - ' and they produced two possibilities! In one, we get to go to a private Japanese house. The other is a large class in a hall so I opted for the private house!!! I can see us carrying flower arrangements back to our hotel room. I have got to the stage of wondering if I should be panicking about this trip but have been so taken up with weaving that the panicking will have to wait.
Posted by Pat at 06:52