I seem to be achieving something at the moment. I have spent the last few days binding a large book. Two or three years ago I bought a textblock of the libretto of Duke Bluebeard's Castle (Bela Bartok). Firstly I like the opera and secondly it was illustrated with wonderful prints. I thought I would put one of my lino cuts on the cover but decided that would not do as it would be at odds with the style of the prints in the text. Then I went out to Woolhampton and took photos of the church door (very mediaeval) and processed these in Photoshop to give me the seven doors of the opera but that was too realist for the inside.

Eventually I had an idea for an abstract and that is what I have done. 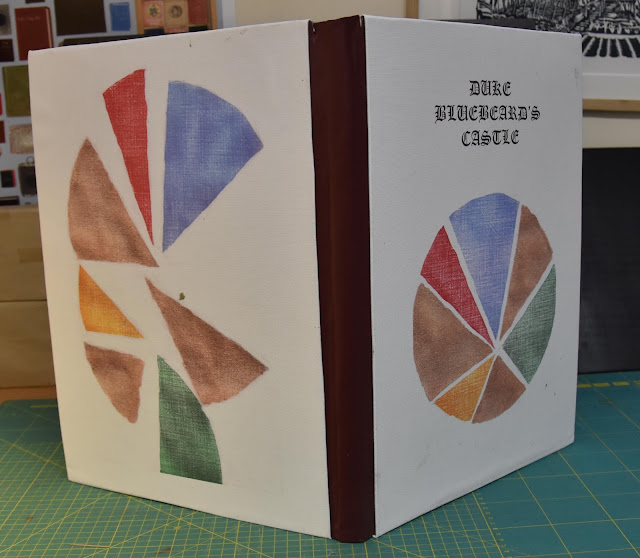 On the front is a circle made of seven quite different sizes and colours of triangles. Each colour represents the colour of what is behind a different door. This signifies the tight organisation of the castle. On the back, the same triangles are all over the place signifying the total disruption of Duke Bluebeard's life. It has been technically difficult because of the size which is a fraction less that A3.

Another book has come my way which is quite different. 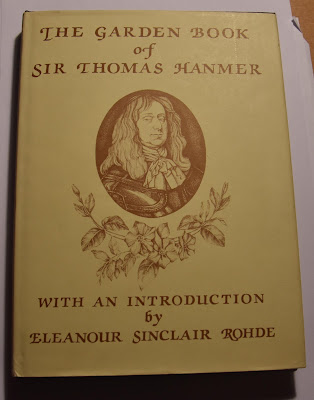 I was reading an article on irises and there was a casual reference to Sir Thomas Hanmer so I looked him up, then looked up Abebooks and found they had a copy of his book so bought it. And it is very interesting. He was a royalist and left his Shropshire house in a hurry in the 1640s. But he returned and went back to his house and his beloved garden and in 1959 wrote his garden book. The point is, it was known about and authors of the time referred to it but it was not published - until 1933.  And it makes lovely reading. He describes all the varieties of plants he had in his garden and how to raise  them. For instance, he has cistuses and he says, these need to be in pots or they will die in the winter. Occasionally he says, I do not have this, but my great friend Sir XYZ has and he says - - - -. The edition of 1933 is a limited edition. There seems to be a reprint in the 1960s. I have one of the 1933 limited edition! Though I did not know that when I bought it.  But absolutely fascinating. All sorts of plants that we grow today, he grew.

And deepest Shropshire not withstanding, he was no country bumpkin. He had himself painted by Van Dyke!!!