Monday was very odd. The exhibition was odd, very cold, and lots of lovely books. Some are shown below. As far as the cold was concerned, I had taken a thermos of tea. Good for survival. 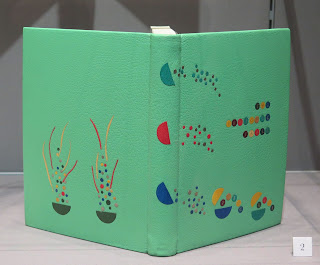 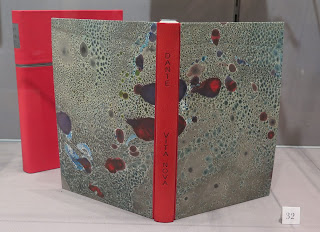 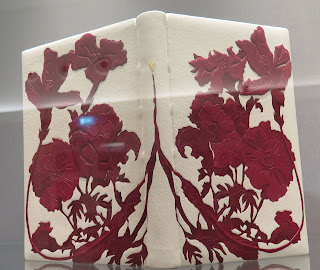 I took the photos but the books are (top to bottom) by Alice Adams, Theresa Wedemeyer and Kaori Maki. All were technically outstanding and sometimes very unusual.

I spent some time designing a cover for a text I have of the libretto of Duke Bluebeard's Castle with illustrations. I have had the book for 16 months without having any idea of how to bind it but I have now. Definitely a few lino cuts will have to be created. But first I need to bind some textblocks as Christmas presents.

When I got to Paddington to catch a train home, I found mayhem. There had been serious flooding in the West Country and, apart from delays, some trains were stranded in the flood waters. So, when I reached the station, No train was going beyond Swindon and there were one or two going as far as Swindon. At this point, the powers that be starting bringing in more coaches and making 3 coach trains into eight coach trains (I fear they had small engines attached. I learnt a new phrase 'full to standing'. It means even pushing hard, they could not get more people in the train. This announcement was always followed by 'the train has been closed'. I wonder how they did that.  I waited for 90 minutes for a train I could get. If the train was going to Swindon by way of Reading (my goal), forget it. They were not letting anyone on except those with tickets to Swindon. And the train was extra long with an under powered engine.

Actually the railway staff have to be congratulated. Noone snapped or lost their temper dealing a mob of hysterical customers who could not see why they could not go home. Certainly someone had full-scale hysterics by my train.