The new computer arrived on Tuesday and since then I have done little but get it up and running. The major problem was installing all the software which took 2.5 days. Fortunately we could read the old hard disk and apart from transferring files across, I took a note of all the software that had been installed on the old machine. The new machine is called ORION.

One thing that did not work well was the inkjet printer which refused to speak to any machine which had Windows 7 installed or have anything to do with this new-fangled idea of a network. It used to work on the old Windows XP.  But the inkjet is very old. As I need an inkjet desperately, I bought a new one which arrived yesterday and it speaks to anyone! So I worked till after midnight, getting everything done that I needed. Hence the photo below 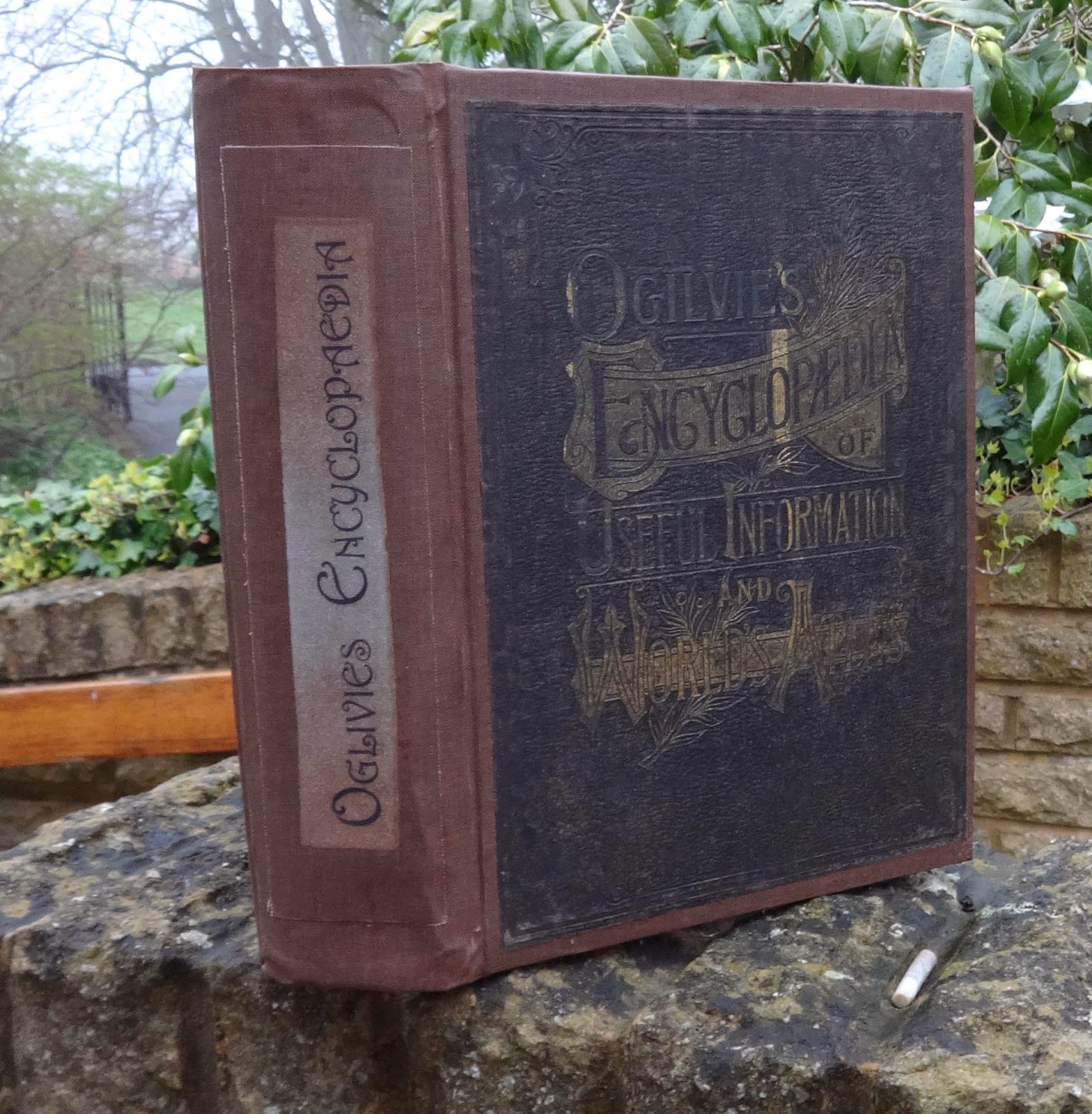 This is the rebound Oglivies Encyclopaedia of 1894 for my son-in-law. The covers had to be replaced so this is now a fullscale library binding. It was originally leather bound but I have rebound it in bookcloth. I managed to get the front piece of leather off the boards without any more damage than was there already. As you can see, I trimmed it square and pasted it to the front. The back was plain and the spine was non-existent so I created a suitable title although the font is wildly different. Photoshop has lots of fonts but nothing like that on the front cover. The way in which this is applied is to print out a reversed title onto JETFX paper, then iron it onto a piece of bookcloth with a very hot iron . The bookcloth is then pasted to the spine, lining everything up, then a sheet of release paper, then a long bandage, wrapped round and round the book to hold it all together while the glue dries. This was done at midnight and this morning, the photo above was taken. It will last another 120 years.

I also did some text for Midlands Textile Forum on cotton which someone else needs. That was one of my deadlines. It needs to be delivered tomorrow.

Which reminds me to grouch. Everyone in MTF was asked which of several different fonts they wanted for the text and they all went for ARIAL. -- - - which I do not like. Very boring, no elegance at   all. But I gritted my teeth and did it in ARIAL and after midnight, it was all printed on decent white cotton. As you all know, I am fussy about fonts and once spent a whole week, deciding which fonts I wanted to use and then downloading them. That is a job I have yet to do for this machine. I may try and rescue them from the old hard drive which I can read on an external drive.

When Michael died, I was very ignorant of how to set up computer systems. I am not an expert yet but I get there in the end!

Today I need to deal with paperwork and also make a start on another African Tree. I have done the sand and have just printed out two trees. I need to trace these, then I can get on. I can see the next ten days being pandemonium, lots of midnights. This is because I need to make a bag for the National Exhibition before Saturday next. The Monday after that is hanging day for the exhibition at Nature in ART and I need to mount all the African trees. I have made the second spider's web and I need to do something about the knitted fishes. I do have a large piece of silk newly woven but it will take a bit of effort to mount and I have decided to show that one at the MTF exhibition in September. That will save me doing anything new for that exhibition. In addition, I am flying up to Edinburgh for a funeral next week. Oh well.
Posted by Pat at 08:20