We arrived at Heathrow at 0615 am and were in Reading waiting for trains at 0830. I caught a through train and got home at 1130. After that, washing was the order of the day. Everything has been washed  and is dry, waiting to be ironed. Post needs I dealing with and shopping for food.
By this morning, I was rested and had a list of things to do. I had forgotten that I had not finished with the Meyer 12 shaft loom which still had the warp on it from the Summer School. 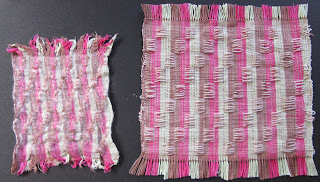 So I wove off the last two samples using a weft of bamboo/cotton and lambswool and put one sample through my washing machine set to 40 degrees. The second unwashed sample is on the right and the shrinkage is about 40%. I was going to put the second sample through the machine at 60 degrees but I reckon 40 is quite enough. That is enough working on that warp and I have cut it off and tidied the loom up. The next weaving project is to weave as many scarves as I can from some handspun and natural dyed woolI have in the stash. There is a lot of yarn and I am hoping to get four scarves out of the one warp but I still have the sums to do. I have decided that I have a new rule. I have to complete at least one project before I  start on a new one. So this week should see me complete a few things! After all, I am not going away until next July when I go to Sweden. The house on the Aland Islands is booked and I am looking forward to spending time before and after the holiday looking at Swedish weaving. And if Drottningholm is putting on an opera around that time, that will be a magnificent bonus.

Of course I am going to Vienna and to Antwerp before that but they do not count as they are only four days each. And we are having a great get together at New Year to celebrate my eldest daughter's 50th birthday.

I do have paperwork to do and will start on that later today.