I have been cleaning the house up as I had visitors for lunch today. If family, I would have left the place in its state of chaos but thought I had better make the effort as I have not put things away since I got back from Japan. So I have
- made blackcurrant icecream - very important as it was for lunch today. It worked.
- written up all the textiles I brought back from Japan and tidied them away into their new homes. In the process, I also tidied up pieces I had before because some went to the Weaving Exhibition and needed to be put away.
- unpacked and put away all my stuff from the weaving exhibition and found various pieces which were not mine. Fortunately I could identify the owner so have sent out emails telling the owner I had them and would return them at the next Guild meeting.
-tidied up and put away everything upstairs which means that floor is visible and I could work up there. This is unusual!!
- edited the next Guild Newsletter which meant emailing/calling people for information (just exactly who in the Guild won what at the Newbury Show in September?) and reminding other people that they did promise - - - -. Everything is now in and I have one colour graphics page to work up Photoshop for the centrefold and it will be finished. So sending it to the printer on Monday morning looks feasible. And on the subject of prizes, I got a yellow rosette. The judge thought the selvedges were poor on my lace wool scarf. I was surprised. I thought they looked quite good, given that I wove lace to the edge.
- cut off the Diversified Plain Weave from the Megado and tidied the loom up.  Cut the napkin off and hemstitched the ends.
- found a Lever Arch file to put my napkins from the 2011 Napkin Exchange into. Printed out my handout and filed my sample too.
- the work room is still a tip with the table piled high with projects. It is going to take a few days to clear. 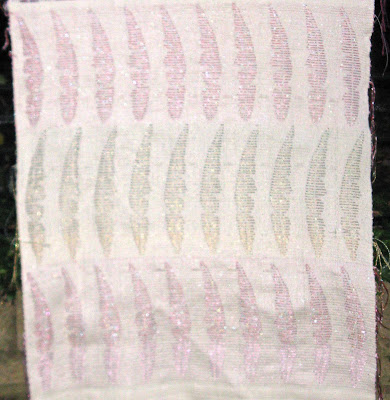 This is the tail end of the DPW warp with feathers woven in lurex. I am hoping there will be enough for the front of a waistcoat. 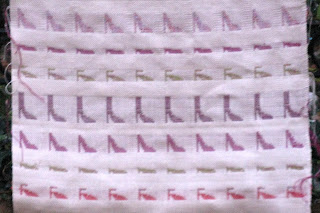 This is the final shoe piece. I have to work on this and will probably overprint using JetFX paper from ArtVanGo. Chris Fletcher who made all the lovely cards (which sold extremely well at the weaving exhibition) gave me back a few remnants which I can test out with my JetFx ideas first.

I will zigzag stitch the ends of the various sections of the DPW weaving and then deal with them. Tomorrow nothing is happening and I hope to reduce the pile on the table a bit.

I have enough food left over from lunch not to have to think about food for a day or two.
Posted by Pat at 16:58