Yesterday (Monday) Rosie Price and I had a gallery-seeing visit to London. We did the Degas exhibition at the Royal Academy which was great, the Japanese Embassy to look at a small but beautiful exhibition in their foyer and the Gerhard Richter Exhibition in Tate Modern. The Japanese embassy exhibition was two or three Japanese and British craftspeople in each of several disciplines. Exquisite braids, wonderful ceramics and baskets and rotten weaving. Well worth half an hour if you are in Piccadilly.
The Richter exhibition covered about 50 years of painting. What interested me was the fact that he worked in two or three different styles at the same time. Also in the 1990s he worked with a squeegee applying oil paint and ripping it off. The finished work looked as though it was Leslie Morgan's breakdown printing which must have been started about the same time.
And then we went to the Daiwa Foundation's Exhibition 'Bite-Size'. Which we thought was poor compared to previous textile exhibitions which have  all been one-man shows. We had arranged that a group of Guild weavers would go up to London in the next few weeks to see this but - - - .
Three out of four is not bad though.
Over the weekend, starting on Friday, the Guild weavers were involved with our Exhibition at the National Needlework Archive. We hung it on Friday. I am not too happy about the labels but everything IS labelled and it would have taken 2 days (which we did not have) not 1 to do the labelling properly. The cushions looked great but the photos of them are going into the Journal so I do not feel I can show them here. But I can show some other photos.

A colour range of scarves 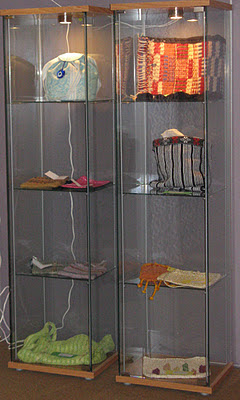 And assorted goodies.
There were lots of looms being demo-ed over Saturday and Sunday and lots of public 'having-a-go'.  I shall not be back until next Saturday.
I woke up this morning and realised that, for the first time for 6 weeks, I was not supposed to be elsewhere or preparing for elsewhere or unpacking from else where. And I felt very cheerful. As a result, I got a lot done which included preparing for bookbinding tomorrow, talking to the builder about replacing the kitchen roof and also a window, talking to a man about installing book cases, running the washing machine several times. I am glad to be back home.
Posted by Pat at 20:32