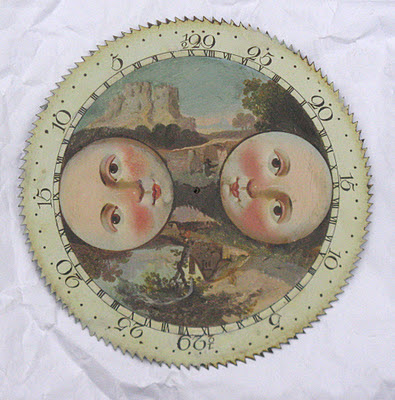 A grandfather clock has been handed down the family. It was made by a 19th century clockmaker in Whitby, Yorkshire where Michael's family has lived since the 1820s.  It is currently owned by Ruth, my eldest daughter, but she decided that taking it to Malaysia was not feasible and it has been staying with us for 5 or so years. However it has not worked in that time and also was damaged in the move to Malvern. Recently I found a local clockmaker to take on refurbishing it. The clock shows the phases of the moon as well as time (the clockmaker says it is an incredibly accurate clock and got very excited about it) and the enameled dial for this has been very badly damaged for years. I remember it damaged at least 30 years ago. The clockmaker suggested that it be repainted and so it has been.  It went to a specialist painted who has made a fantastically good job of it. I should have taken a photo before repainting. The paint had entirely disappeared from the top third of the dial leaving bare metal and one of the two faces was very badly damaged. There was a lot of cracking elsewhere. No-one has any idea what was painted on the top section so a ruined castle will do as well as anything else. I am rather pleased about this.
He has refurbished most of the clock but a new wheel has to be cut and we are aiming for an operational clock by Christmas when the KL bunch are descending en masse. The current plan is for everyone to have Christmas with Anne in Leamington Spa and then the KL bunch and me depart for New Year in Dundee with my sister, Dorothy. The younger members (everyone but Dorothy and myself) have tickets for the Hogmanay street party in Edinbuirgh and are looking forward to it immensely.
Dorothy has invited all the other bits of the family for lunch. I reckon there will 25 people if they all turn up.
Posted by Pat at 09:59