Version 2 I ran into trouble trying to get photos ito the last version of blog. So I hope this works

After months away, I am back at South Hill Park at my weekly printing class. And enjoying it no end.   I discovered that just about every Lino block I did in 2018 needed more work on it. So I started with a picture of Osaka which was originally in colour and wondered what it would look like in just black. (See below). I think the black is better.

As a backup, I started working on lino block based on the garden at our cottage at Anglesey. When I looked at the block, I realised some areas on the block had not been completed and the only trial print had been in black. So I tried three colours and it looked like it might just work if I choose the colours right. So this week I tried out a fluorescent pink and it worked!! I printed several sheets and then added some red to the pink and that was better. So several pulls later, I declared this block completed and went home to look for the next block which I think is another view of the Port of Osaka. 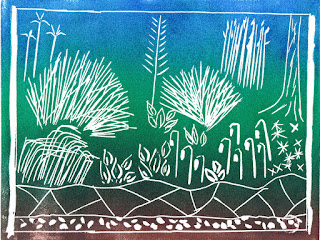 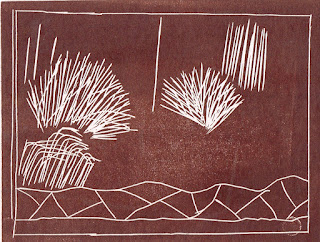 The brown one was an early trial.