A few weeks ago, the Guild exhibition organiser got an invite to the Mayor Making at Newbury. As the invite was for two, I went along, after all, I am Chairman. The proceedings were today and I am still suffering from shock. First of all, it never occurred to me that Newbury had so much history. After the Norman Conquest, it became a borough -(new borough). And continued to grow until Elizabeth'stime. She visited twice and the second time, the town threw such a good party for her that she made them a free borough. And everything stems from that. They elect a mayor every year and he has to swear to look after Newbury. And that is what we were invited to see. We had the full bit, two Mace bearers, a town crier, a town marshal and lots of processions. So we went to the Corn Exchange to witness the swearing and then the mayor and council formed up outside the Town Hall and the audience tagged along too and we processed through the streets of Newbury to an ancient church. St Nicholas was a Saxon foundation but was totally rebuilt in the 15th century and is distinctly gorgeous. Early Perpendicular. The only problem was that they had two songs (note not psalms) with very modern settings and the congregation was a bit floored by this! As they say, I do not think we were all singing from the same hymn sheet. If you listened carefully, you could several different verses being sung at the same time. After the service,we processed, this time 20 yards to the church hall where we had lunch and very nice too. A very interesting day. I would not have missed it for the world.

The sky was very blue and there was a farmers market on it the market square which added to the excitement with the processions. 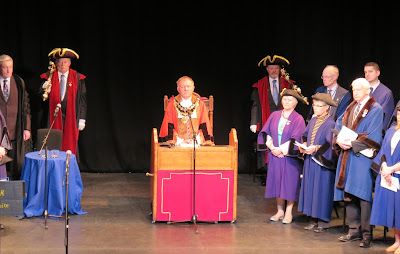 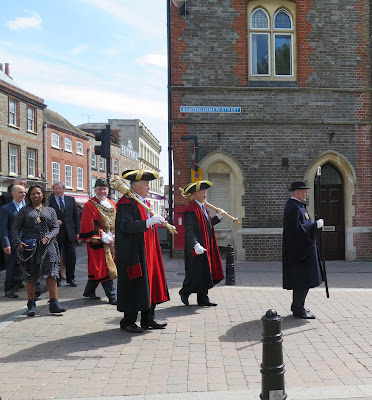 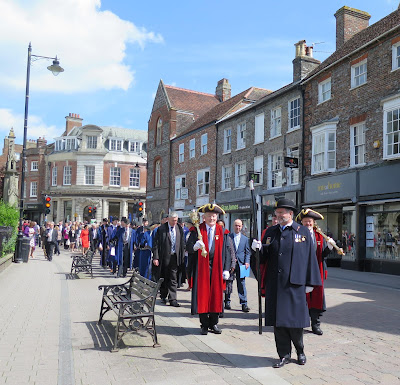