The blog absence is due to unpacking. The good thing about moving stuff between the garage and studio is that I am definitely getting fitter - and thinner. These are bonuses. Shelves have been erected and books have been installed. The office is looking normal - except that the desktop computer is in intensive care. I started warping up the Meyer on Saturday but did not get far. But things are definitely improving.
And now I am going to relive the weekend in Aberdeen. I did not take my camera and so any photos in this blog are due to Anne and her trusty iPhone. We visited two castles and a crafts village and had a bit of spare time on Sunday evening before making for the airport. Oh boy has the airport changed. I recall it in the 60s before oil when the airport was a wooden shed on the edge of the runway and, when the three planes which came in per day were not due, the shed was locked up. Today it has the weirdest adverts I have seen in any airport. The biggest billboard on the way in, advertises refurbishing your oilrigs! Inside there are adverts for strange chemicals which do something for the machinery. Helicopter firms show off their wares and Chevron is noticeable by hogging lots of billboards. This is by way of introduction to our previous stay in Aberdeen. It was the first house we had ever bought. It cost all of £6000.00 and had central heating which cost us an extra £500.00. It was in Bieldside, West from Aberdeen along the river.
So I suggested that we could visit the house and see how it had changed. Bear it mind that it is 43 years since we left. I managed to find it and 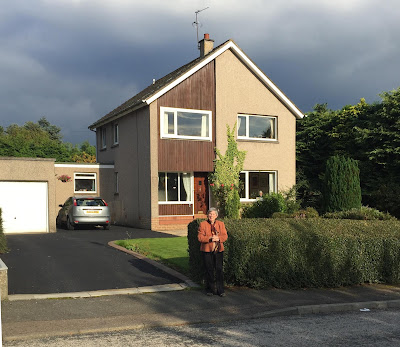 here it is. Anne and I walked up and down the pavement, taking pictures. The house has not changed but the front garden has. While doing this, the owner spotted us and sallied forth. I started to explain when he interrupted and said, 'I know you. You are Mrs Foster. We bought this house from you'. I was flabbergasted and even more when he reminded me of how he had bought the house. Michael had been appointed Professor of Computing at Essex University and most of the estate knew this. He was looking for a house on the estate and a friend told him we must be leaving soon. So he knocked on the door and stood there and offered us £12000.00 Well it had not been put on the market, indeed we had not been to see the lawyer. So we went the next day and 24 hours later he had bought the house.

He insisted on showing us the back garden because of Sorbus cashmiriana ( a sort of rowan) which I had raised  from seed ( picked up from the ground in Westonbirt). When we left it was 7 ft high and had masses of white/pink berries. 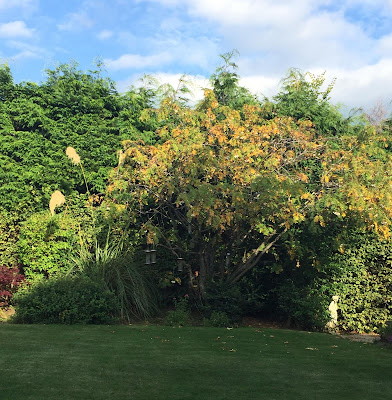 ﻿
Here is the same tree, 43 years later. I was pleased to see it so healthy. 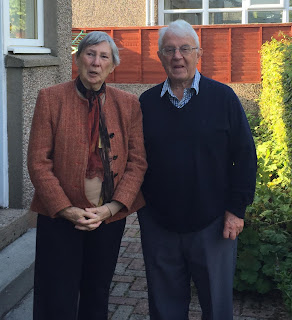 ﻿
And here are the two owners of the house. He said something interesting. I said that the place was perfect for children in our day and every house seemed to have at least two. He said that people had not moved away and it had become a very quiet elderly persons' estate.

It left me feeling good. The back garden was unchanged and they thought the shrubs I had put in were great.
Posted by Pat at 21:42