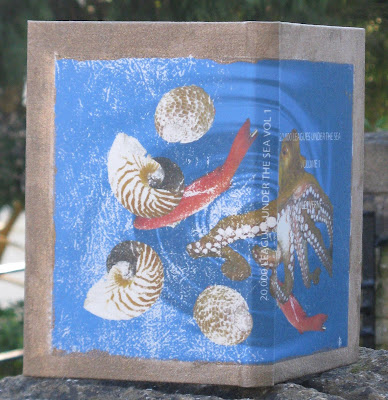 At last, the first of the two volume Jules Verne is finished. I am not supposed to boast but note the central positioning of the title on the spine. You have no idea how carefully I measured this all up - and it worked! This project has been around for about a year. I don't have to check my records because the photos of the shells were taken by me in Australia and the photos of the strawberry grouper were taken in Kuala Lumpur Wet Market!!The assembly and the whirlpool background were all done in Photoshop. 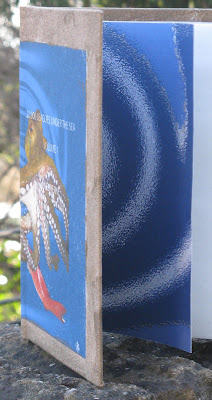 This is a view of the endpapers which again were created by me in Photoshop.


Yesterday I spent from 0700 to 1300 hours and from 2000 to 2300 hours running three computers and backing up to DVDs, to Dropbox, to Google+. I have reached the end and the Linux machines will definitely be turned off soon. I have realised that I need to install Microsoft Office and Framemaker on the Windows machine I am going to use in future. Currently it has the scanner control software, Photoshop CS5 on it and ROXIO Create . So after a mug of tea, I will try to find the master disks for these programs.
Not much textiles happening at the moment. I am deciding what to do about further work on the Castlemorton Common pieces and how to mount them.
Posted by Pat at 11:22