Thanks to Sandra Rude for pointing that there would be nasty floats in the feathers draft and, after 3 years, it is all coming back to me. The draft was designed to be woven in 90/2 silk which would be set at 60 epi. And what's a 7-thread float in that? Not important. But if your sett is 8 epi, boy, have you got problems! So I set about twills and, if you're not careful, you get 5 thread floats in that. This fabric is definitely limited to 3 thread floats. So simple does it and I will have to rely on colour - and coming from a sheep, the yarn will be pretty monochromatic. Oh well. I have asked from an interview with the owner of the yarn!!

One odd thing happened last week. 2 weeks ago, two of us cleared out the studio of a deceased bookbinder and I acquired a cardboard box 3 inches thick of paper. I could see it was a mixed bag but, when I investigated last week,  the contents were a bit startling (no, no I said startling, not indecent). There were a number of elderly calendars of maritime scenes and a large number of sheets with calligraphy practice on them and about 20 A1 sheets of handmade paper (very nice) and several large pictures, eg of owls, of the earth and one poster.  I can't find this on the web - see below. It looks like a copy of a 1930s poster but might be modern. But I like it though I would not have bought and will give it a home. 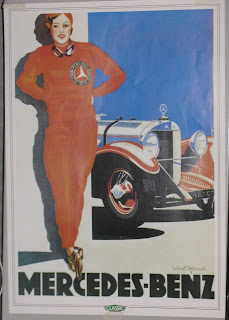 I have finished the enamels piece on the Megado. When I inspected the previous weaving which was done with smaller enamels three years ago, I found the grey silk of the pockets was sagging so decided I would have to do something more secure.  I am not sure I did the right thing but it's too late now. When I got to the stage of inserting an enamel, I rubbed down the back with sandpaper and then put a thin layer of  Araldite over the back. A  layer was also spread on the cotton fabric at the back of the pocket (not easy!) and then I inserted the enamel slowly and carefully. The first one which is in the top row in the photo, I did not do well but the next row containing two, I did much better.  The piece has been cut off and I will leave it untouched under tomorrow morning when the Araldite will have set. 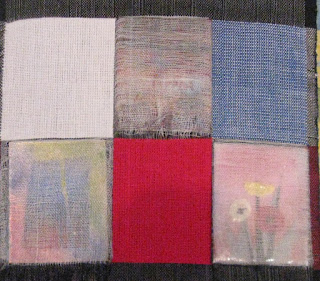 I have at least  a metre of usable warp left and have decided what to do, indeed I have adjusted a draft to do it. Kennet Valley Guild weavers have all been issued with postcards of paintings by Gerhard Richter and, by March, everyone has to create a weaving based on their postcard. One weaver has finished his work of art - a spectacular demonstration of clasped weave!! When he showed it round, you could see everyone thinking 'Must get on with that!!'.  My offering is going to be a table runner.